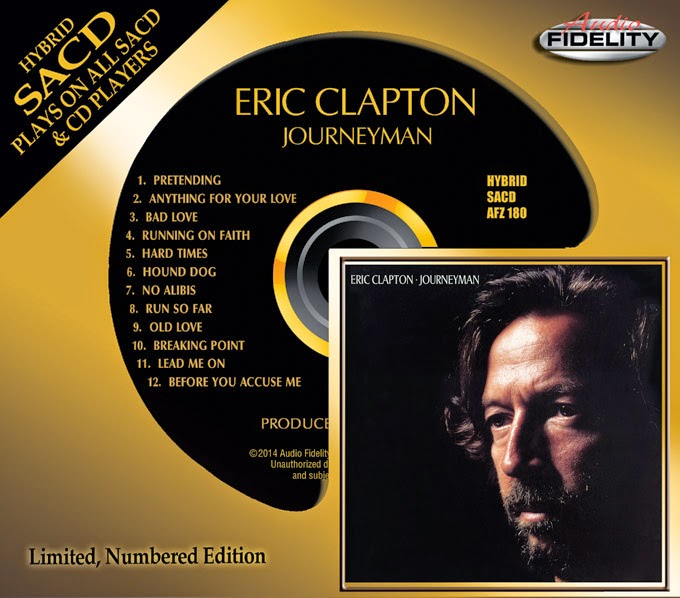 “...one of the greatest rock/blues guitarists on the planet!”

Camarillo, CA - Much to the elation of Eric Clapton fans across the globe, Marshall Blonstein's Audio Fidelity has released Clapton's 'Journeyman' album as a limited numbered edition Hybrid SACD! Eric Clapton is a true legend. 'Journeyman' reached #16 on the Billboard album chart and became Clapton's first solo studio album to go double platinum. Like any of his best albums, there is no grandstanding to be found on 'Journeyman'...it's simply a laid-back and thoroughly engaging display of his virtuosity. The album was heralded as a return to form for Clapton, much of it has an electronic sound, mostly influenced by the 1980s rock scene, but it also includes blues songs like “Before You Accuse Me,” “Running on Faith,” and “Hard Times.”

“At the center of it all is Clapton's guitar work...stinging blues and soaring pop.”

Clapton sounds more convincing than he had since the early '70s. Not only is his guitar playing muscular and forceful, his singing is soulful and gritty - he seems to have struck the perfect balance between the fiery blues of his youth with the pop flavorings of his later years.

TRACKS:
Pretending
Anything for Your Love
Bad Love
Running on Faith
Hard Times
Hound Dog
No Alibis
Run So Far
Old Love
Breaking Point
Lead Me On
Before You Accuse Me