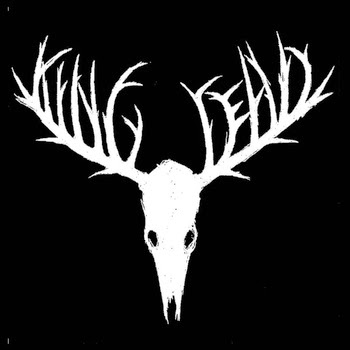 It was a long day, work had worn me down with simple monotony. I got home and checked the mail. A glorious caffeine smell burst out of the box. Oh yes, it was coffee time. I had requested a King Dead CD and a bag of Evil Weevil coffee to review, both were impressive.

I'll start with the CD. King Dead is a instrumental trio from Pennsylvania, this is their debut EP, and they've signed with Earsplit (not bad at all). It's a little long for an EP, but so what? When my band, Deadweight (now Grel) put ours out we said the same thing. It's good music. I usually think that instrumental bands have a hard time sounding dynamic without the use of either vocals or virtuosic playing, but these guys do it. The music has feeling and some emotion, which is more than can be said of most things I hear, even with vocals. The sound is a neat mix of psych/doom/ambient/whateveryoucallit, and it has that spring-reverbed-to-hell surfdoom thing I talked about in my review of Merlin's album. I love that sound. I think it's really cool and refreshing to hear, even Sun o))) has started doing things like that. So, there.

I always have a rough time picking standout songs on these things, mainly because I don't think so much of this music is built to have standout songs, but to fit together as a whole instead. If I did have to say "oh, listen to this one" I'd say listen to "As One Plows And Breaks Up The Earth, So Our Bones Hvae Been Scattered At The Mouth Of The Grave" which is a mouthful, but yeah, it kind of encapsulates everything I have to say about this great release.