D.A.D - No Fuel Left for The Pilgrims 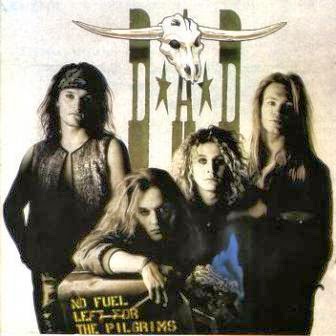 When this album was released back in 1989 I had heard about these crazy Danes but dismissed them because of their cowpunk tag. In hindsight that was very stupid of me since from the moment I actually listened to them, I loved them and have ever since. Prior to this wax they had been signed to the Danish label Mega/Medley and performed and recorded under the moniker Disneyland After Dark. But with 'No Fuel Left For The Pilgrims' Warner had picked them up on a worldwide deal and they immediately ran into the first of two snags involving the album. The Disney corporation came knocking on the door threatening to sue if a name-change didn't occur, so the guys obliged and switched to D.A.D. However, longtime fans still call them by their proper name, Disneyland After Dark.

What finally changed my mind regarding the band was when I saw them play on the main stage at The Hultsfred Festival in 1989. Totally blown away doesn't even begin to describe my state of mind watching the craziness unfolding on stage accompanied by a fucking fantastic soundtrack. First thing I did upon getting home from the festival was to buy 'No Fuel Left For The Pilgrims' and the rest is history.

How the hell can you go wrong starting off with a song like 'Sleeping My Day Away'? Easy...you can't! Lyrically a true punk anthem while the music is mid-tempo with lead guitarist Jacob Binzer playing a very country-like twang line on top. Full frontal total madness is what 'Jihad' is. AC/DC and Ramones' bastard child comes to mind in this stomper of a humorous rocker with singer Jesper Binzer being in top form. He's Jesper's older brother by the way. They bring down the tempo on 'Point Of View' but with a lot of twang again, bringing back the sound of their first two albums, 'Call Of The Wild' and 'D.A.D Draws A Circle'. Kind of The Cult-ish at first 'Rim Of Hell' turns into a slow bluesy number until the chorus kicks in and AC/DC is back. It weaves back and forth elegantly like this. The cowpunk returns in full fervour on 'ZCMI'. Tongue-in-cheek I have a big cheesy grin on my face everytime I listen to this song. Diesel and dust fills my nostrils as I jump on my Harley and head down the highway listening to the rifforama that is 'True Believer'. Very good indeed!

It's back to the twangy guitars and riffs galore in the punkish anthem 'Girl Nation'. The title says it all so no explantion is necessary hehehe. Continuing along the same path musically is 'Lords Of The Atlas'. A very contagious song with big hooks and nice harmonies and I find myself bouncing of the walls. Overbearing narcissistic drunks are something we've all come across one time or the other and that ordeal is perfectly presented in 'Overmuch'. It has enough riffs to destroy the Great Wall of China a million times over. Controversy number two for this album comes in the shape of 'Siamese Twin'. It's rather explicit sexual lyrics caused Thailand to ban it due the country's high number of siamese twins. Stig Pedersen leads the way with his thumping two-string bass guitar on 'Wild Talk' as the band launches into a hook-laden and chorus-driven rock anthem. Taking a huge left turn album closer 'Ill Will' is a heavy, brutal thrasher totally different from anything D.A.D have ever done up to this point or since. Definitely a great way to end this fantastic album and a true neck-breaker!

'No Fuel Left For The Pilgrims' along with the follow-up 'Riskin' It All' were the band's  shoot at worldwide dominance but as great as they both are the big break through didn't happen, so Warner subsequently dropped them. Although a set-back this didn't deter these Danes and they are still going strong after all these years recording and touring. Having formed in 1982 that's not bad at all and they still have the spark musically as well as their trademark tongue-in-cheekiness. Just look at the titles of their two latest releases: 'DIC•NII•LAN•DAFT•ERD•ARK'  and 'Disn30land Af30r D30k'. If you love big heavy riffs, humour and having a good time, D.A.D is the band for you. I suggest you start with this album as well as 'Riskin' It All' then progress with all of their other albums. You will not be disappointed.