Argus - Beyond The Martyrs 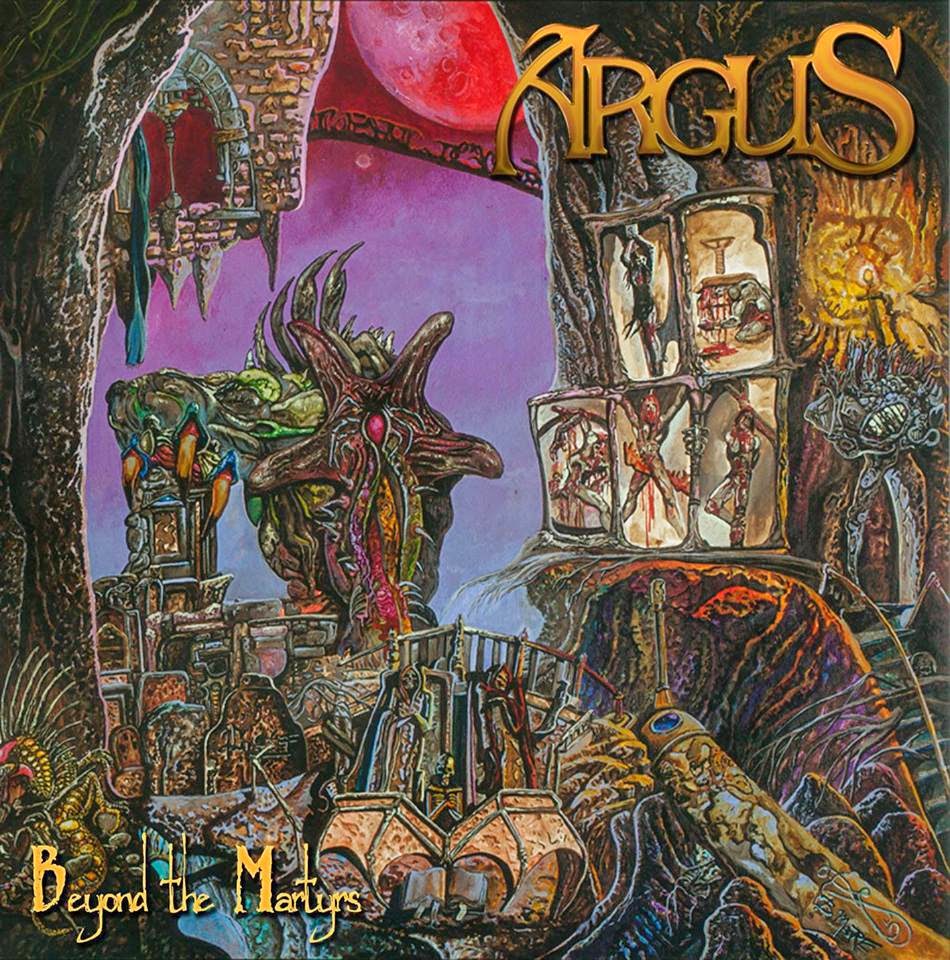 Oftentimes bracketed solely within the doom sphere, Argus are more than that. Indeed, doom is a big part of their music but real heavy metal is their forte as well. And when you combine the two like Argus does high class music is delivered. 'Beyond The Martyrs' is the band's third full-length and they are really defining who they are but that's Argus for you. Each release has brought something new from the band while still retaining their own excellent style. This has not changed with opus number 3, on the contrary I have to say, since 'Beyond The Martyrs' is ferocious and ruthless and...fucking fantastic!

Having just about perfected the blend of melody and harmony of Thin Lizzy and heavy metal á la early Iron Maiden, Argus are veering more and more toward the metal aspect of their sound. Full, razor sharp riffs saturate each song when the twin-axe attack isn't playing sweet delicate rhythms all while the bass guitar and drums are punishing throughout. And let's not forget the vocals which are more darker á la doom but Brian Balich still hits the high notes with such ease and elegance. A great example of all this can be found in 'The Coward's Path' and 'Cast Out All Raging Spirits'. They are probably my two favorite tracks on 'Beyond The Martyrs'. Fast, heavy, in your face and played with such eloquence I'm left wondering how the hell they do it. Guitarists Jason Murcio and Erik Johnson are trading licks and riffs back and forth like there's no tomorrow, while bassist Andy Ramage and drummer Kevin Latchlaw are the conductors holding everything together and dictating the pace.

Lyrics has always been a stronghold as well for Argus and 'Beyond The Martyrs' is no different. Whether they tell real-life stories like 'By Endurance We Conquer', which is about Sir Ernest Shackleton and his crew trying to escape the icy masses of Elephant Island to find safety on South Georgia in southern Atlantic Ocean, or the undying love in 'Four Candles Burning' when whatever happens I will never lose love for my soul mate, or questioning our own existence as it is in 'The Hands Of Time Are Bleeding', Argus are always spot on. And having Brian Balich as your singer makes things even better. Very few frontmen has his vocal range as well as the talent to bring out the proper emotion from each track.

Stability along with great musicianship is one of the major keys in Argus success as a band. They've had the same line-up for six years and when you have the know-how and talent like these guys do and blend everything together, it really doesn't come as a surprise how fantastically good they are. If you don't believe me, simply listen to 'Beyond The Martyrs' or any of their other release for that matter, and you know what I am talking about. Tight-knit is not a strong enough adjective to describe Argus but it's all I can come up with.

'Beyond The Martyrs' is an amazing release by a truly one of a kind band and I wish more bands would use them as a template how do things. And I mean every aspect of being a recording band. If that happened there would be more great original music out there pushing bands and musicians to do their outmost both on stage and in studio. I guess we can dream, right? In the meantime, 'Beyond The Martyrs' is available keeping dreams and hopes alive!