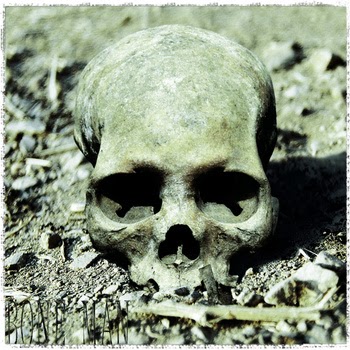 I was driving to a rugby match in Sacramento.  Early morning, up by five.  Coffee in hand, iPod blasting out the latest batch of submissions to the Ripple.  Some good bands, sure, but I got to be honest, my ears were starting to hurt.  So much of the stoner/doom stuff coming in was all just sounding so much the same.  I was ready to kill for something original.  Something different.  Anything to spare me from another submission of droning, post-sabbath trudging.

Then Bone Man came on.  Seeing the name, I didn't have much hope.  Bone Man.  What could be more barren than that?  I conjured up images of all the same monotonous pummeling I'd be subjected to.  But it's my job to listen to music.  Lot's of music.  So I swallowed my trepidation and let the iPod play.

And I found my lost piece of musical nirvana.

Immediately, "Dead Weight" caught my attention, starting off with some very simple riffing, but the tone of the guitar was totally different.  Not the normal, bottom-end magnified, fuzzed out "heavier than Sabbath" tone.  It was meaty, yet surprisingly light.  More retro-70's than modern doom.  Then that breakdown around 40 seconds in.  What was that?   Quiet, subtle, gentle acoustic guitar strumming.  It didn't last long, maybe 10 seconds or so, but it had been a long time since I'd heard a "Doom" band bring that sort of dynamics into their music.  At this point I wasn't sure what I was in for, so when the song finally blasted into the full might of it's doom fury at 50 seconds in, I wasn't surprised.  I was ready for it.  Pummeling riffs and massive assaults of fuzz hit me like a sledgehammer leading right into the most menacing, occult vocals I'd heard in ages.  So many bands "try" to sound occult.  Not Bone Man, they nailed it.  As the riff crashed around me, building in furious intensity, I was on board for every note, every frame.  Then, like before, they blew me away.  In the middle of the blistering frenzy of doom, following a gentle bass break, came some gorgeous melodic guitar, leading the song deep into the territory of 70's prog.  From that moment on, there was no stopping the band.

"Closer to the Sun" rides a great acoustic riff into a pasture borrowed directly from the land of Jethro Tull.  With very Ian Anderson phrasing, Bone Man moves through a building crescendo of post-pastoral 70's prog.   Thick in melody, heavy in riffs, monstrous in tone.  Bring in that organ and I'm sold. I may have just found my favorite song of the year.  Truly an epic.

Without missing a beat, "All Eyes on Me" flows next, another can't miss song of texture and nuance in a post-70's prog vein.  Gentle and rough, all at the same time, and catchy as hell.  "Stuck in the Mire" brings back the heaviness in crashing waves of guitar atonality, and "A New Breed" takes it from there and never looks back.

Bone Man have released one of the more remarkable albums I've heard this year.  Equal parts howitzer heavy and pastoral gentle.  Jethro Tull crossed with Monster Magnet all dropped off in the gentle wavering fields of the California desert.  I'm shocked that I don't hear more people talking about this band.  In a sea of monochromic sameness, Bone Man are the full colors of the heavy rock specrum.   They're not afraid to take chances and push the boundaries, fusing the calmer prog with the astonishingly heavy.   A band that needs to be discussed and brought forth.  A band that needs to be heard.