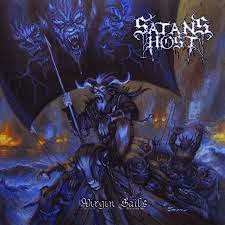 Alright, I will readily admit that I am a huge fan of this band, so reviewing this album was a no-brainer for me.  And I love Moribund Records.  I thought that maybe they had gone by the wayside, because I hadn't seen any releases from them for a while.  They operate out of the same little town here in Washington state where you will find Tony Reed of Stone Axe and Mos Generator fame.  The dude who runs the label really is named Odin.  If you're a fan of metal, you really owe it to yourself to check out the label.  Absolutely killer underground stuff.

Satan's Host is one of those killer bands, and they've been doing their thing for a while now.  If you're not familiar with them, their thing is this pretty cool hybrid of power metal style vocals with some killer, crushing death and black metal music underneath.  It might be a head scratcher on paper, but man oh man does it work on album and on stage.

Sometimes you can look at an album title and figure out what its about.  I'm not sure what “Virgin Sails” means and the press release wasn't very helpful, but I guess it really doesn't matter.  Just fire this one up and enjoy.  There are 10 songs on offer here and its an offer you don't want to refuse.  Sometimes you listen to death metal and you can get a little tired of the grunts and growls that pass for vocals, so the cool part of this band for me is that you can hear and understand the lyrics, and they are usually about some pretty cool stuff.

The leadoff track, “Cor Maleficus – Heart of Evil”, gets everything going properly, just ripping and roaring along and setting the tune.  This track is almost just a straight power metal song, but there is nothing wrong with that.  And the tracks get heavier and nastier as the album goes along.  “Of Beast And Men” is another favorite of mine.  Its another one that really gets the blood pumping, with a nice galloping riff on the guitars and some absolute pummeling on the drums.  “Vaporous Of The Blood” is another one that I really like.  Starts off slowly but then all of sudden goes up to full throttle with a little vocal treatment that is more what you might expect from a death metal song.

You may know this band already and if you do you will enjoy this release as a continuation of some very solid albums over the last 6 or 7 years.  If you're looking for something a little new, a little different in your metal, I highly recommend this album.  It combines elements of metal that you don't often see together, and the playing and writing on this release are very good.  This one comes with a great big thumbs up from your buddy Odin.  You know I never steer you wrong.