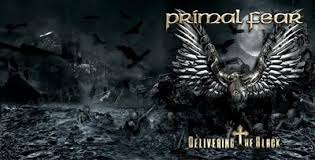 Primal Fear has fast become one of metals true keepers of the metal flame. "Delivering The Black" is one of their best albums so far. Truly they are a metal fans dream band. Insane vocals, blistering guitars, drums from hell and a bass low end that will shatter your soul. Metal is forever...they said it and they mean it. On this album killer tracks both nuclear meltdown fast and ethereal angelic slow abound. This is one hell of a collection of good, true, loud metal songs.

"King For A Day", and "When Death comes Knocking" are two of the best. These two songs alone could sell out arenas. So many damn good riffs and leads throughout.

"Delivering the Black", and "Never Pray For Justice" are incredible tomes of metal perfection. This sonic assault has caused me to open my windows in 10 degree weather and crank it. Everyone needs this album in their collection.

Ralf Scheepers is hands down one of metals greatest vocalists. I can't believe the power and the range of emotions his voice possess. Just awesome. When you think classic metal vocalists his name is forever one of the top five.

just when you thought the album couldn't get any better along comes "One Night In December". weighing  in at a metal breaking 10 minutes. This song is just...well it leaves you breathless.

The ballad is an acoustic masterpiece and Liv Kristine(Leaves Eyes) does a magical job. Her voice is also an incredible gift from the gods. A different take for the band but it works. Few metal acts could pull it off. They do. Primal Fear are simply that good. The led zeppelin of the classic metal world.