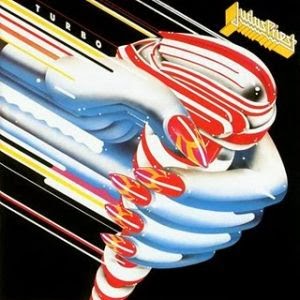 
To fully appreciate the Turbo album, one needs to put it in perspective.  The year was 1986, a rough time for “Traditional” metal bands.  It was the halcyon time for the “hair metal” bands, yet the bands on the heavier end of the spectrum released arguably the best albums of their careers – (eg, Metallica “Master of Puppets”, Slayer “Reign in Blood”, Kreator “Pleasure to Kill” just off the top of my head.)  Bands like Priest and Maiden had either two choices, follow the chart-topping trend set by bands like Poison, Cinderella and Bon Jovi, or go brutal like the heavier bands.  It took Priest until 1990 to take the thrash-heavy route, with “Painkiller”, but in 1986 they were going a bit soft.

That is not a slight or insult in any way.  Turbo is not “Look What the Cat Dragged in” by any means.  The songs don't make me want to choke anyone if that’s any indication.  Maybe I have a soft spot in my heart because this was the first Priest album I ever bought.  I still remember back in the days of vinyl, it was hanging on the wall of The Wiz, next to Iron Maiden's “Somewhere in Time”.  I bought both simultaneously, but to this day listen more frequently to the latter.  It's a shame, because re-visiting Turbo for this article, it's still a damn good album.

I'll spare everyone the story of my crush on KK Downing that spanned from when I was a dewy eyed 13 year old, till I finally got to meet him in my late 20's (And looking back, for both of our reputations, it's better I don't get into it....insert innocent sounding whistle here.)  At the time of it's release, and for the next few years, I was obsessed with this album, subjecting my pop-music loving friends to it on a regular basis.  I didn't care that the metal-heads in the neighborhood outright hated this record, (save for a track or two, I remember a neighbor saying he didn't think “Out in the Cold” was that bad.)  Rob Halford defended the album in  Kerrang in 2008, “...Personally I think there are still some great tracks on that album ... It's one of the recordings that divide opinion.”

Turbo is a fun album.  It's a nice departure from “We're a metal band and we love being metal and aren't we heavy”? Besides, that area was more than ably covered by Manowar.  And the song “rock You All around the world” still has some of that “rockers vs the world” mentality.  Are some of the lyrics cheesy? Yes, but so what!  THINK FUN!  And the videos that went with the singles for the record?  The “theme videos” for Turbo Lover and Locked in..look them up on Youtube – the look on Halford's face when confronted with Amazonian jailers is priceless (and really who didn't know back then!)

As with any Priest release, there is some great playing on Turbo.  Yes, they're using guitar synths, but it's still Tipton/Downing.  The twin guitar leads on “Hot For Love” are classic Priest, with an arena-rock backing track.  And that's another thing, Tom Allom's production is typical of mid 80's hard rock albums.  Huge thudding bass drums, bass low in the mix, almost AC/DC-ish.

Listening like Turbo is like going back to your old high school yearbook.  Yes there were some things that make you uncomfortable, but overall it wasn't that bad and in a way you kind of wish you could go back to that more innocent time.

Unknown said…
This was a fun read because it is relevant to anyone just getting into metal around that time. For me it was 1988 and Ram it Down was available which was pretty heavy for a 14 year old. However, because me and my friends were desperate to get hold of the whole Priest back catalog and were listening to all albums all at once, Turbo was just one album of the many faces of Judas Priest. It was cheesy but it got just as many listens as the rest. Also, many of the tracks were on Priest...Live! which probably made it seem more essential than it really was. Priest...Live! was the only live video we could find. Out in the Cold was a great intro for that concert.

Great nostalgis trip. Thanks! Must try and dig it out or find a vinyl copy (but not the latest pressings as I hear those are crap and taken from remastered CDs).
February 27, 2014 at 1:08 AM