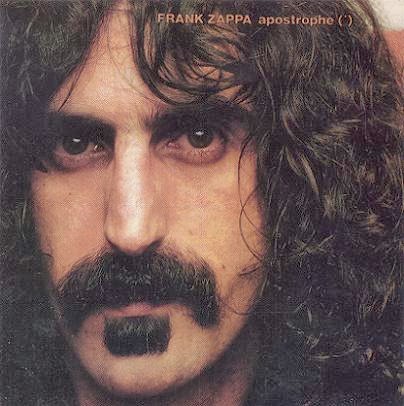 Defiance.  In 1974 I was sixteen years old, a junior in high school, and was hell bent on being on the edge.  I would play albums specifically chosen to evoke "turn that down" screaming from my parents or a yell of "turn it off" due to offensive lyrics or subject matter.  I reveled in each such moment as a triumph over authority.

Prior to 1974 my "go to" artist to offend my parents was Frank Zappa. I could put on 200 Motels and regale Mom and Dad with lyrics such as these from the song “Half A Dozen Provocative Squats”:

She's just twenty four
and she can't get off.
A sad, but typical case, yeah.

The last dude to do her
got in and got soft.
She blew it
and laughed in his face, yeah.
Yeah.

Thus, in 1974 when Zappa released apostrophe (') I drove down to Licorice Pizza and purchased it on the day it was released. I waited until both my parents were home before I played it for the first time.  I gleefully envisioned their horrified looks and screams when I put it on.  It didn’t happen that way.
Dad arrived home from work as Mom fixed dinner.  It was the perfect time to be an abrasive teenager.  I tore the cellophane, split the cover and put the album on the player.

I fully expected an irate parental tirade as the first cut, "Don't Eat Yellow Snow" pervaded the living room, but, nothing.  Absolutely nothing, until the lyric:

I heard my father laugh, then I heard my mother laugh. As Zappa cautioned about "Eskimos named Nanuck", my parents came into the living room to catch "St. Alfonso's Pancake Breakfast."  I was dumbfounded.  My straight-laced, conservative parents were belly laughing as Zappa told us St. Alfonso "stole the margarine."  I was flummoxed.  It was not the reaction I was seeking.  My father started to listen intently.  Little did I know that once he heard "Cosmik Debris" every time I would provide an explanation for breaking curfew, he would repeatedly say to me, "Who you jivin' with that Cosmik Debris?"

I turned the album over with hope side 2 would be more offensive and shock my parents. No luck with "Excentrifical Forz." In fact, my father appreciated the musicianship - surprising for my father and his distaste for rock music.  Not surprising when you consider Zappa was accompanied by legends - Ansley Dunbar, Jack Bruce, George Duke, Jean-Luc Ponty - and a dozen other incredible musicians.  Then the title song played and resulted in a room full of attentive listeners.  I became more and more perturbed that my parents also liked it.

I thought finally my parents would be derisive upon hearing "Uncle Remus."  Instead, they laughed and smiled as Zappa sang:

. . . I can't wait till my Fro is full-grown
I'll just throw 'way my Doo-Rag at home
I'll take a drive to BEVERLY HILLS
Just before dawn
An' knock the little jockeys
Off the rich people's lawn
An' before they get up
I'll be gone, I'll be gone . . .

I was getting frustrated.  This was my music.  I really enjoyed it and also enjoyed that Mom and Dad disdained it. I looked at the album cover and realized the final track was called "Stink-Foot."  I was flush with anticipation that such a rude title could only precede a rude song - one that would offend my parents and reinstate Zappa as my number one musical parental agitator.  Alas, it was not to be. They began to laugh uproariously as Zappa extolled:

. . . Now scientists call this disease bromidrosis
(that's right!)
And well they should
Even Napoleon knows that
But us regular folks
Who might wear a tennis shoe
Or an occasional python boot
Know this exquisite little inconvenience by the name of:
Stink foot . . .

I was divided.  On the one hand I thought the lyrics ridiculous and the music incredible, evocative and masterful.  On the other hand, how could I enjoy Zappa if my parents enjoyed Zappa?  Then I realized, while my parents enjoyed this particular release, it was not their music.  It was my music and that is what Zappa was trying to tell me - "the crux of the biscuit is in the apostrophe".