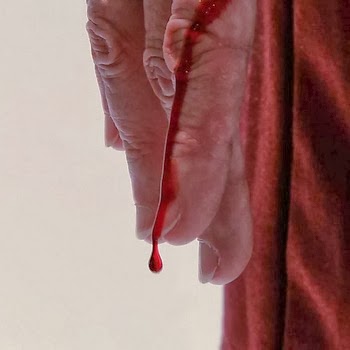 Doug Harrison, vocalist for Canada-based progressive rockers FEN, has launched a solo project called Slug Comparison, and the debut release is a music video for the song “Bringer of Doom.”

A dark collaboration between Harrison and Swedish director Peter Wiholm, the video depicts a woman (actor Kim Arklie) who slits her wrists and lowers herself into a bathtub, then enters the dream-like world of her subconscious. In the shadows of this world a mysterious man (actor Brad Hammerstron) keeps appearing, and the woman finds herself running for safety.
“Thestory wasn’t what I had in mind when I wrote the song,” says Harrison, “But when Peter came up with the idea, I was impressed by how well it matched the lyrics, so we went ahead with making it.”
“Bringer of Doom” is the first of a group of songs written at the same time as FEN’s Ripple Music release, Of Losing Interest. Harrison says, “Between writing sessions with the band, I found I had more energy to keep going, and more ideas kept coming out of me, so I’d work on those at home, piecing them together on my computer. Eventually I had enough of them that I realized I needed a new project.”
For “Bringer of Doom” Harrison wrote and performed and/or programmed all of the instruments with the help of long-time FEN producer, Mike Southworth of Creativ Studios. The song is available for $1 at bandcamp: https://slugcomparison.bandcamp.com
www.slugcomparison.com