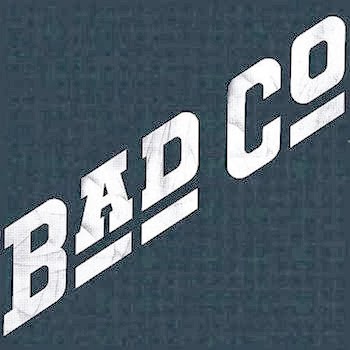 Sometimes it pays to procrastinate.  A few months ago, I told Racer I wanted to do an article giving Bad Company props, he was all for it and added, “Free gets all the love. Bad co was killer.”

I got about 200 words in, but the never ending marathon of doctors appointments, concluding with surgery to remove internal organs, put writing on the back-burner.

Then the Ripple Writers came up with an idea for a “theme” - pick a great album from exactly 40 years ago (1974) to retro-review.  Hmmmm...Bad Company's first album came out then.  This was the kick in the ass I needed to tweak my original article and contribute more content to  the site!

Bad Company was a super-group that was born out of guitarist Mick Ralphs frustration at the direction Mott the Hoople was going.  Mott were riding the wave that was the tsunami  of “All the Young Dudes” - and suddenly, due to the David Bowie connection, they were a glam rock band.  In a recent interview with Mojo magazine, Ralphs said he felt the songs he was working on no longer fit in with Mott's new direction added “I was always more into blues-rock and wanted to get back into that simpler, earthier stuff.”

In early 1973, singer Paul Rodgers and drummer Simon Kirke were without a band when Free finally split amidst inner-band squabbles and guitarist Paul Kossoff's erratic behavior due to an eventually fatal heroin addiction.  Bassist Boz Burrell came from the revolving door of musicians that surrounded Robert Fripp in King Crimson – and Bad Company were born.  Managed by Led Zeppelin guru Peter Grant and launched on Zep's own Swan Song records, the group were set to take on the world.

All the hype and record company money wouldn't mean a damn thing if the band didn't produce good music.  Fortunately for the annals of Rock n' Roll, the first Bad Company album is a collection of classic tunes.

The album kicks off with the now classic rock radio staple, “Can't get enough”.  Clocking in at just over four minutes, its a perfect hard rock song and a great introduction to the band.

“Rock Steady” is an even shorter slap to the face and kick to the butt.

The song “Ready for Love” was originally a Mott the Hoople song, and Mick Ralphs sang lead.  Admittedly he didn't have the vocal range to do it justice, but Paul Rodgers did.

“Don't let me down” is a slow, bluesy jam that wouldn’t have sounded out of place on a Free album.

For some reason the song “Bad Company” always reminds me of Ennio Morricone and “Spaghetti Western” soundtracks.  My mind works in bizarre ways.

“The Way I choose” is another bluesy Free-esque track written by Paul Rodgers, with a nice saxophone thrown in the mix.

The mood is lifted by the Mick Ralphs penned track “Movin' on” - a day in the life of a rock n roll musician. “Jump in to a taxi and the time is gettin' tight/I got to keep on movin' on I got a show tonight”

The album closes with the mellow, acoustic guitar driven “Seagull” .  This is actually my favorite track on the album because it shows off Paul Rodger's powerful vocal range and Mick Ralph's expert playing without the bombast of the heavier songs on the album.

Bad Company would go on to release a series of successful albums in the 70's before falling apart in the 80s, resurrecting (with a new singer) in the 90's – and more recently touring the “Classic Rock” circuit playing their greatest hits to cougars in leopard print spandex.

Love this! I, too, feel like the band title track is something straight out of a western. Even more so than Wanted Dead of Alive by Bon Jovi.