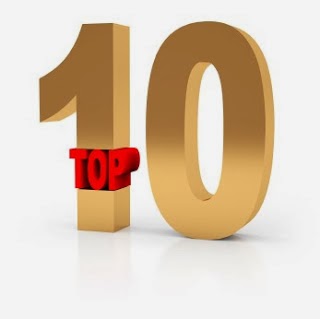 Sooo.....I’m notoriously hard to please when it comes to listening to music.  Shocker. Turns out, I’m not real shy about it either.  I listen to a bunch of it.  I just don’t like all of it.  Even with what seems to be an abundance of fresh jams every year ends with me scrambling to put together my “best of” list.  Well, this year I was prepared.  What I wasn’t really prepared for was the onslaught of the dark and heavy retro doom that swept the first quarter or so of the year.

The drab and dreary months of late Winter and early Spring were filled with retro occult loving groups from Europe, such as Kadavar and Uncle Acid and The Deadbeats, and retro-power rock groups like Scorpion Child.  Ghost (B.C., ...whatever) probably sold the most records which is to say that they actually sold some.  However, I still wasn’t impressed.  If you ask me, Satan was the biggest winner there.  Well, him and Ozzy.  Definitely not Bill Ward.  I don’t know if having Bill on board would have made the Tony Iommi snooze fest that they called 13 any more tolerable or not, but it set the tone.  Have the old gods fallen?  Nah.  Not really, it just didn’t move past what they were doing 20 years ago.  Maybe they really did forget the 70‘s.  With Black Sabbath’s stolen wizard’s staff, Orchid’s new album got a praise.  They wish they remembered the 70’s something fierce.  They also had a lot of decent help out of Metal Blade Records.  It seems that stoner rock is now worth their time along with Nuclear Blast, Napalm Records, and other established underground metal labels.  I just thought we liked this stuff to get away from metal?  I could be alone on this and that’s cool.  It’s a good sign.  The scene has grown.

There were plenty of good releases but this was the year of the label.  We saw a BUNCH of labels pop up or add stoner bands to their roster.  STB Records and Lay Bare Recordings certainly made some great records happen.  Ripple Music had another stellar year of releases, many of which are making year end lists.  Small Stone snatched up some serious talent this year with some surprises like Sweden’s Jeremy Irons and The Ratgang Malibus and very understandable signings like Neon Warship.  I’m anxiously awaiting a new Lo-Pan record like the rest of the world.  It’s going to make for a serious 2014.  That’s the good news and it’s barely scratching the surface.

Still, the bands who released their own records and promoted them without a label showed up strong.  That’s my favorite part. You never know who is going to step on a fuzz pedal next and that’s exciting.  While the year was slow to start for my listening pleasure, the rest of the year was filled with more good records than I could have possibly listened to.  Soo....meat and potatoes, anyone?

In my ever so humble opinion, these are the top 20 records that are the best stoner rock records of 2013.


I didn’t think I was much of a Sasquatch fan before this record came out.  Boy, was I was wrong.  Just about everything that I thought was missing from the records that came out this year found their way into my ears via IV.  IV takes number one on my list by the simple reasoning that I played the shit out of it for a month straight without really listening to anything else on my IPod.   Ok, not really, but pretty much the truth there.  Most repeated track:  Drawing Flies.

These guys are something.  I can’t find anything to gripe about on their record except that they didn’t let anyone know that they were releasing it.  Well, it certainly caught my attention.   I thought it was a ballsy move and it paid off.  Lightning At The Door is everything I want to listen to in a rock record.  In fact, I made a conscious decision to make sure I didn’t play it to death as to extend the freshness of it.  It’s still doing it for me.  This is my vote for band that needs signed the more than anyone else at the moment.

While I’m at it, these guys are totally from Nashville and not from Memphis.  Sorry about that, dudes.


I was relieved that I loved this record.  After Mick left the band there was a hole in the sound that needed filled.   Well, Earth Rocker doesn’t suck and they tightened it up a whole lot more since Strange Cousins From The West.  It in fact rocks the Earth...hard.  I waited for the hype of the record to die down before I listened to it.  It was well worth the wait.  It’s still getting played regularly on my speakers and headphones.   I think everyone needs a little DC Sound Attack!!! in there life.

I had some time to catch up on some bands that I might not have really dug my teeth into as much as I wanted to over the past few years when I was stuck in the satan worshipping, bong huffing retro doom vortex.  Mos Generator’s live record was perfect for that.  Recorded on tour with the big bad grand daddy of doom, St. Vitus, it straight up jams with tracks from one end of their catalog to the other.  They toured the shit out of the beginning of the year and this record is the proof on how they destroyed where they treaded.  Also of note, this is the first release from Lay Bare Recordings.  I’m excited to see what happens with the label.

Ed Mundell is a beast!  Returning to where he left off with The Atomic Bitchwax, Ed put together a super trippy, jammed out instrumental record early in the year and it shreds in the nicest way possible.  It was my shining light during Ghost and Uncle Acid’s reign (btw, nothing against them...I just don’t dig it),  UEMG’s psychedelic hard rock was definitely some of the best released this year.  I really think that an Allman Brothers Band fan could sit side by side with an Electric Wizard lover and smoke a fat one in peace while grooving on this one.    I would listen to this over the last few Monster Magnet records any ol’ day.

I was really anticipating Lowlands.  I dug it’s predecessor, Done So Wrong and I feel like they are just catching stride as a band.  They tour a lot.  That’s good.  They also added a producer to the process and it really helped take their sound to the next level.  Their video for ‘Under Iron Feet’ is probably the best done and my most favorite video I saw this year.  I think what The Flying Eyes are doing is working...at least in Europe.  The U.S. is going to be slow to catch on, if at all, but I do hope they go over well here with their next release.  They sure do love ‘em in Austin.

This record is probably going to be on a lot of the lists this year and for good reason.  It’s a heavy stomper with a lot of existential conundrums thrown in for good measure.  stoner/doom fans love that sort of thing.  It’s pretty heavy metal but still hangs on to the fuzzy vibe that they have done such a good job of honing over the last decade.  Ripple picked these guys up just in time to release their record.  That was a good move.  Someone needed to.

Geezer is a great band.  Their unpretentious way of heavy grooving was really something I needed to hear this year.  It reminded me of why I got into the genre in the first place and I really appreciated that.  Guitarist and singer Pat Harrington knows his stoner rock and it shows.  For the nerds, he also does The Electric Beard of Doom podcast.  Released on STB records, The Gage EP is a great record to listen to if you are stuck in a rut.  It was that for me at least.  Suggestion:  Roll up your Sunday gage when listening.

I have a feeling that every time The Heavy Eyes release a record it will make my best of list.  These guys have it down cold.  Fuzzy, groovy, retro-reverent, and all around fun to listen rock and roll that falls perfectly in the stoner groove.  I don’t know why they haven’t been picked up by a label here in the U.S.  Maybe they don’t tour enough.  I don’t know.  Their records are fantastic.
Highly suggested track:  One Hand On The Buffalo and all the rest of ‘em too.

I’m from Indiana and I can tell you that voodoo isn’t something that we know a lot about around here except in the cases of my boss’s Cuban daughter-in-law and Left Lane Cruiser.  They have got serious juju.  LLC only get stronger with every release.  Their reverence for roots music mixed with their seriously hard rocking delta-punk tendencies make for a sound to make your back bone slip every time.  They’ll “paralyze ya” just like they said they would.
File under:  Hard Lessons In Rock and Roll and Play It Fucking Loud

These records are also very much worth your time to get to know and stood head and shoulders above most of the rock music that I listened to this year.

While I have your attention, I want to give a shout to Grip of Delusion Radio for fighting the good fight and trying to blow this shit up with your internet radio station, Slade’s Stoner Rock BBQ for being the coolest stoner rock themed blog on the planet, The Electric Beard of Doom for being the best stoner rock podcast, and Paranoid Hitsophrenic for the amazing job of cataloging and organizing the doom charts into something worth reading every week.  I also officially nominate Bill Goodman as the official Patron Saint of Stoner Rock.  All in favor?  Cool.   Finally, The Ripple Effect couldn’t have been anymore welcoming and tolerant of my questionable writing skills and opinions.  Why?  I have no clue.  However, you guys help keep me sane and I appreciate it more than you know.  Cheers!
Posted by The Ripple Effect at 9:55 AM

Email ThisBlogThis!Share to TwitterShare to FacebookShare to Pinterest
Labels: best of, top 10 albums of the year, years best