Tedeschi Trucks Band - Made Up Mind 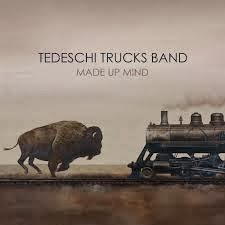 This isn’t going to be a standard review by format.  Just thought I should let you know right off of the bat.  I have been putting this review off for months (I got an advance copy even).

I love the sound of Derek Trucks guitar.  That’s a fact, Jack.  I care about it more than I do most people...without exaggerating one bit.  This one is personal.  We’ll get to the new Tedeschi Trucks Band record, Made Up Mind, in a second.  First, a little background.

By now, Derek Trucks is a mainstream musical figure.  Tedeschi Trucks Band is signed to Sony as was Derek Trucks Band.  Starting from a ridiculously young age, Derek Trucks was a guitar prodigy.  He started playing at 8 years old and by 11 he was on the road with his own band.  The nephew of Butch Trucks, drummer for The Allman Bros. Band, it was only natural for such a gifted slide guitar player to eventually join the group.  Sharing guitar duties with no other than Warren Haynes, the two combined to become one of rock’s most esteemed guitar duos...ever.  He was in his very early twenties.  Prior to that, he was broken into the Jamband scene with the super group Frogwings, which Butch Trucks put together to keep active in the music scene.  Featuring Oteil Burbridge on bass (also in ABB and TTB for a time), his brother Kofi on keys (also of DTB and TTB currently), jamband guitar wizard Jimmy Herring (Jazz Is Dead, Col. Bruce Hampton’s Aquarium Rescue Unit, The Dead, ABB, Widespread Panic) and John Popper of Blues Traveler on vocals and harmonica. Derek was still in his teens.  His wife, Susan Tedeschi has joined just about every group he has had since to play guitar and sing in guest spots live and on record.  Susan herself was a blues guitar prodigy and had a major recording contract at the age of 16.

That’s a lot of clout.  It’s no wonder that these guys are headlining festivals, recording for Sony, getting nominated for and winning grammies, and on an on.  They are no joke. They are a world class act of the highest musicianship.  I have spent countless hours listening to Derek and his musical family and I hold that group of musicians in high regard.  Their new record is great. Everything about it is wonderful.  It has to be. They had a budget and got to record out of their fantastically equipped home studio.  They get down and jam, they write heartfelt soul ballads, they wail.  Sometimes they rock.  And this is where my beef starts....  I feel like Derek and Susan have been working this record out for a while.  You can hear the precursor songs and stylistic leanings on both of their albums over the last decade. It makes sense.  They ARE married and have children (which is kind of amazing/scary to think about if the musical bone comes from the gene pool).  They are collaborators of the highest order and I highly respect that.

However, I just want them to rock for a whole record.  Just one record of balls out rock and roll and blues and jazz and technical proficiency and star power and on and on.  I have high expectations and I can’t do it, but they should.  Forget the Grammy’s, forget the steady airplay on adult contemporary radio stations, the late night TV appearances, I want something a little more primal,  polished but chock full of brassy brazenous (I think I made that word up)  attitude.  Hell, they can keep the funk. They are fantastic at it...just make it rock.  I’m saying I really want them to hit the gas.  They get there a couple of times on Made Up Mind, but I’m at the point where I think Derek Trucks has played the same guitar solo for the 394th time.  They can come back to this sound any day.  It’s in their blood.  I think they should do it because they can.  The big time record business is a nice place to make a living but I don’t think they are making new fans.  Their fan base is getting old.  I think they could really rope in a lot of younger people if they just blew the fucking doors off of the thing.   Made Up Mind is the kind of record that you get when you have a team full of people with immaculate taste in music and the chops to break it down and make it happen.

However, even though orchestrating such talent is a feat unto itself...I don’t think they need it.  I”m waiting for the moment when everyone on their tour bus decides that Neil Young is the greatest thing to ever happen to audio tape.  That’s the record I want to hear next time.     Thanks TTB. It’s a nice listening experience, especially if you work in a dentist’s office.  Please, just please....bust LOOSE for the next one. KTHX.