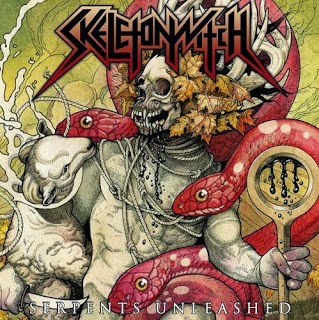 (So good, it's worth reviewing twice.  Before we had Pope's take.  Today, we see what Odin thinks of the beast)

I'm just going straight for the hyperbole on this one.  This is an absolutely amazing album.  If it wasn't for the fact that Carcass blew us all out of the water with their release earlier this year, this one would be THE death metal album of the year.  Still and all, though, I did not see this one coming.  This is a very solid, workmanlike band that I have had the privilege to see a couple of times.  I've followed their career and been a fan.  But to drop this one on us is a surprise.  Skeletonwitch are definitely ready for the big time.

Seriously, give this one a listen and if you didn't know who it was, you might wonder how you had missed this classic of 90's Swedeath.  I don't mean to say at all this is just a copy cat effort.  They have taken their own thing, which has always been a mixture of thrash and death and rock and roll, to an entirely new level.  I just want to listen to this over and over and over again.

This one comes charging out of the starting blocks like the finals of the Olympics 100 meter, only the sprinters are being chased down the track by those really fast zombies, and it really is a race of life or death.  The first four tracks just come along and blast your face off.  The fifth track, “Burned From Bone”, slows things down just a hair and has a ripping almost rock guitar solo that comes out of nowhere but totally fits the song.  And that is the story of this entire album.  Everything, every influence, is pulled in and fits just seamlessly, even when you might think that they would have to make it fit awkwardly.  Did I tell you that this band has completely come into their own with this release?  These guys are monsters of the first order now.

The fun continues with “Unending, Everliving”.  This one starts out with an almost Maiden-esque riff, then blasts along into death metal.  Awesome.  “Blade On The Flesh, Blood On My Hands” is just another ripper of death.  The growl and rasp of the vocals are perfect, sounding like a demon straight from hell but enunciated well enough that you can understand everything.  And the rest of the album just comes after you and finishes the deal.  Another big plus; there are no overwrought epics on this one.  Nothing clocks in longer than three and a half minutes and most of these blaze by in less than three.  Get it done and move on.  Perfect.

You really need to hear this one if you consider yourself to be even slightly a fan of metal.  That a band can come out with an album like this that fits so snugly into a genre, yet at the same time expands the genre and themselves, is not something that happens often in the metal game.  Yet that is exactly what Skeletonwitch have pulled off here.  Easily one of the best metal albums this year, this is something that should be in your collection.  Like yesterday.