All Them WItches - Lightning At The Door 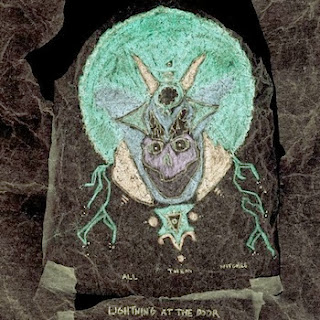 All Them Witches dropped their latest record without warning. They just....released it. No bravado, no press releases, no Kickstarters (that I know of)...nothing... here it is, hope you enjoy it.  As sudden as it was, I dug the move.  I like surprises.

Not that it was surprisingly awesome.  I have dug everything I have heard from these hard rocking, psychedelic fuzz purveying Memphisonians.  Coming out of the same scene that can boast of The Heavy Eyes and The Dirty Streets, All Them Witches lay it down hard with the best of anyone in the genre today.  Even with the unheralded release of “Lightning At The Door”, I foresee it making in onto many of this year’s “Best Of” list.      Start to finish, “Lightning At The Door” doesn’t let you down.  It’s groovy, psychedelic, heavy, laid back, bluesy, loud, and quiet.  They aptly describe themselves as “Psychedelta”.  That’s a perfectly beautiful way of describing.  Flourishes of Charley Musselwhite inspired harmonica playing, subtle keyboards,  and spaced out vocals compliment the rock solid rhythm section dedicated to the groove fill out the album where other bands fall short.  These guys are the real deal and represent the Memphis sound well.  In reality, few bands playing psychedelic blues these days do it better.

Instead of giving you the play by play of the record, I’m going to keep it short and sweet.  You are making a mistake if you skip over this record.  These guys are full of surprises and I think they may only produce more if they can keep it together.  I sure hope they do and a good record label picks them up.  Someone should.  “Lightning At The Door” fills out a void that has been missing in the stoner/fuzz/psychedelic blues categories over the last few years and is more than worth the price of the Bandcamp download.