Whitesnake -Made In Britain 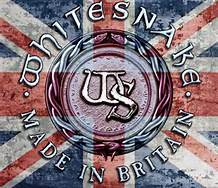 Whitesnake is one of those premier rock acts that never fails to deliver. This live recording is a tribute to the musical genius of David Coverdale, and the instrumental prowess of his his chosen band mates. Even with an ever changing line-up over the years, Whitesnake has been a hard rock consistent mainstay. This particular group of musicians lays down a sonic assault that leaves the listener shouting for more. Classics like "Still Of The Night", and " Here I Go Again" mix well with new favorites, "Forevermore", and "Best Years". This is more than a live album, this is a full on Whitesnake experience.

The sound is clear and crisp and the band sounds in top form. Every note comes across clean and clear. I liked the way the set list flows and the inclusion of "Burn/Stormbringer" really impressed me. Coverdale has never sounded better. Like a fine wine he is getting better with age. But make no mistake this is an epic rock opus created for all ages. Younger fans will delight at the newer hits included and older more seasoned fans will dive right into the "hits" of the  80's.

In terms of songs this cd is packed with a ton of live classics and new masterpieces. "Bad Boys", "Slide It In","Soldier Of Fortune", "The Deeper The Love". Just a great live tribute to their studio perfection. This is truly a musical master class on performance.

Doug Aldrich and Reb Beach are one of the unsung guitar heroes of our times. Quietly they have created a legacy within the Whitesnake family that is second to none.  Doug is a phenomenal shredder of the highest caliber. His guitar tone is invincible and unique. This guy shreds at exactly the right moment and then settles into the hit making groove that helped shape Whitesnakes career.

Reb Beach is amazing, truly a master of the instrument. Throw in the drum power hitting of Brian Tichy and Michael Devin's fantastic bass work, and Michael Ruedy on the keys, and this live recording is on fire!  David ,Doug and Reb ,work well together and they continually come up with these killer new songs, as well as breathe new life into the old.

Few bands today  could produce such a fresh, polished live performance. Whitesnake onstage and studio, gives many  younger bands a run for their money. They are that good. This cd is certainly a must have for any fan of Whitesnake.

It's all contained within.