The Folks Behind the Music - Rys - The Ripple Effect 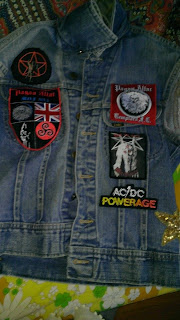 I always wrote, ever since I was a pre-teen when my parents bought me a state of the art (for the time) Smith Corona Deville 750 word processor.  I wrote album reviews, video reviews. They all got lost through the years but it would be interesting to go back and read how my 13 year old brain perceived music.


We're all the product of our musical past. What's your musical history? First album you ever bought? First musical epiphany moment? First album that terrified the hell out of you?

I grew up in a house filled with music.  My dad would always have the stereo on 10 blaring out Wagner or Handel – the heavy metal of classical!!  You could hear his music from 2 blocks away!  The neighbors didn't dare complain for fear they would be thought of as uncouth – like it was embarrassing to criticize classical music!  My mom played piano and for some reason I remember World War I fight songs being thrown in the mix somewhere.  I still want to buy war bonds!  At one point I think my dad owned over 1,000 Classical LPs.  Every week he would go into the city to add to the collection, he mostly went to charity shops where he found really obscure releases in pristine condition for about 25cents! He taught me how important music can be.

The first album I ever bought – to this day I don't remember if it was “The Romantics – in Heat” or “the Police- Synchronicity”.  I was 10.  If you do the math, I'm now a little old lady who should know better.

First musical epiphany moment : 16 years old, in a hotel lobby in Disneyworld, listening to the local rock station on my Aiwa cassette walkman with big black foam headphones and “Highway Star” by Deep Purple came on.  It was at that moment my teenage brain snapped and I decided everything I listened to previously was soft, pansy b.s and I needed to immerse myself in heavier music.

First album that terrified the hell out of me?  Probably my brother's collection of Shaun Cassidy LPs.  That white, toothy grin, feathered hair and glassy coked out eyes staring at me from the album cover was absolutely terrifying when I was 7.


What's the last album to grab you by the throat and insist you listen?

The good – the Internet and file sharing is now the modern equivalent of 80's tape trading.  How else can someone in New York hear about an upcoming band in Beijing China?

The bad  - too many bands that sound alike , are all about image and not about substance. And hey – what happened to songs in metal? There are no more SONGS.


With so many music sites, how would you describe what you do? What's your unique take on the music and writing? 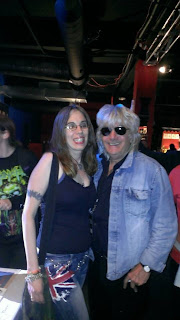 I am happy and proud to be a part of Ripple Effect, and love that I have the freedom to pretty much write about whatever I want, in whatever time frame I want.   Sometimes I get an idea in my head and have to put it to paper.  Hopefully people will dig my shoot from the hip style of writing. And have a sense of humor about things.


What's been your all time greatest "Find"? That band you "discovered" before anyone else and started the word spreading?

Elixir from the UK.  Although I didn't really discover them as they were a late comer to the NWOBHM scene but usually get overlooked so I hadn't really heard of them.  They  came to the US once, in 2006 and I was asked to sell their merch as I was already working for another band on that mini tour.  When I heard the opening notes of their song “Star of Beshaan” my jaw hit the floor and I was drawn to the stage like a magnet. Sell merch for them?  Sure after I get a copy of ALL their CD's!!  I then volunteered to help them start more of an internet presence and at the time set up their Myspace page which really helped get the world out. Then when that site fizzled out I hooked them up on Facebook which was really instrumental in getting the word out that they were still around and putting out new material.

Last year they split up but the singer and guitarist formed a new band called Midnight Messiah – look for them on Reverbnation – I set that up as well (Pats self on back).


If you could write a 1,000 word essay on one song, which one would it be, and why? What makes that song so important?

Oof I go through periods where I get obsessed with ONE song, and play it over and over again– it changes all the time, but right now I gotta say “Ride the Sky” by Lucifer's Friend – killer vocals, tripped out music and it's just obscure enough to give me street cred.

Midnight Messiah, Mighty High from Brooklyn NYC (Hi WOODY!), and The Stoney Brothers Blues Revival also from Brooklyn.  (Jim better get me a large coffee after this plug) oh and I would be remiss if I left out Pagan Altar (not from Brooklyn).


Tell us about your personal music collection. Vinyl? CD? What's your prized possession?

I”m embarrassed to say that after several moves my music collection is a shell of it's former self – too many times I've lived with people that I've turned onto bands and they've mooched my Cd’s!!  Most of my music is now on the hard drive of my laptop as mp3 files.  I still have a few vinyls – and some classical LP's that belonged to my dad.

My prized possession is a bass guitar pick handed to me by Trevor Bolder after Uriah Heeps' show in NY.  It's not a personalized pick, its just a basic Herco Nylon heavy gauge.  But the fact that he went out of his way to find one for me when I asked is a memory I will always cherish.

When someone says “Hey I read your review, I'm going to check that band out...”

I would be involved in the music industry one way or another! Now I'm on the right side of things -  at my age, the days of tour buses and sneaking around hotels are way in the past!!


Ever been threatened by a band or a ravenous fan?

Haha, yes but it doesn't bear mentioning here...let's move on.


In the end, what would you like to have accomplished, or be remembered for?

I like to have known that because of my work in promoting bands, people are turned onto good music.  Its all about spreading the word and getting talent heard.

If I'm on a roll and caffeinated up, I can bang out a 1,000 word article in about less than an hour.  So writing doesn’t' take up so much time, typing 90 WPM does have its benefits.  In between that and maintaining  social media sites for Midnight Messiah, Elixir and the British Steel Festival ( look em up on facebook!) , I still have tons of time to devote to the “real world”.


What's next? Any new projects?

To keep writing about my experiences in the music world.  And working my butt off to get the word about about the NWOBHM bands that are coming back together. And finally taking bass lessons!! (are you reading this, Mike C??)

Coffee.  My pick – 7-11 Hazelnut with Cinnamon flavored creamer.  With nutmeg sprinkled on top.

Posted by The Ripple Effect at 6:33 PM