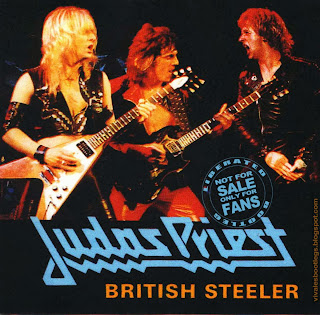 I can't remember the first time I ever heard Judas Priest, but I can now pinpoint the date I became a Judas Priest fan and a full blown metalhead - July 5, 1980.

That was the day Long Island radio station WLIR broadcast an entire Judas Priest concert from the Calderone Concert Hall in Hempstead (duuuuude, HEMPstead). WLIR later changed their call letters to WDRE and became more of a "new wave" (blech!) station but when I first started tuning in around 79 and 80 they'd play all kinds of cool shit. I wasn't really into The Waitresses or The Flying Lizards but it was better than hearing "Take It Easy" or "Born To Run" yet again. I knew eventually they'd play an AC/DC or Ramones song to keep me interested. WLIR even let Frank Zappa guest DJ sometimes when he was in town. That was always really entertaining. For such a kick ass city, NYC has always had the wimpiest rock radio stations and still does.

Like a lot of radio stations back then, WLIR would also broadcast concerts on the air. Some were pre-recorded from other cities but some were live simulcasts. I remember hearing some great ones like the Ramones playing an outdoor show somewhere on Long Island and another of AC/DC with Bon Scott. I remember Bon yelling at the crowd "cool it, don't get thrown out!" a bunch of times. Whatever they were doing that might get them thrown out was exactly what I wanted to be doing, too. Those shows were great to listen to but I already owned It's Alive and If You Want Blood so I kind of knew what to expect. The Judas Priest show, however, was a different story. I had definitely heard "Living After Midnight" and probably "Breaking The Law," too but that's it. British Steel was in all the record stores but I hadn't picked it up yet. I decided to tune in to this radio broadcast on the day after the 4th of July (and a month away from my 13th birthday) to see if investing in the vinyl was worth it. I got a lot more than I bargained for.

The broadcast started off with all this thunderous noise and then I could hear a motorcycle engine revving up as the band launched into "Hell Bent For Leather." I was completely stunned. In the 70's, the term "heavy metal" was a derogatory one and no band wanted to be labelled that until Judas Priest came along. I'd read about it Creem Magazine but wasn't really sure what they meant. Once I heard Judas Priest I could clearly recognize what is heavy metal. And, more importantly, what it's not. 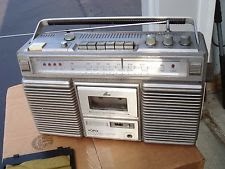 I still have no idea why I didn't put a tape into my Yorx boombox to record the show. It had cassette and 8-track recording capability. Priest delivered a Metallic KO and I was too stunned to move. I definitely remember sitting on the edge of my bed with my mouth open staring at the radio hearing songs like "Sinner," "Beyond The Realms Of Death" and "Victim Of Changes" for the very first time. At one point I thought maybe this was just a syndicated concert they were broadcasting and not an actual live show but, sure enough, Rob Halford mentioned WLIR and the crowd went nuts. I looked out the window to my boring New Rochelle street corner and wished I was at the gig. Maybe if I clicked the heels of my red Pumas three times I would have been transported there.

Priest played for about an hour and fifteen minutes. There was the hit "Living After Midnight" with other British Steel killers like "Grinder," "You Don't Have To Be Old To Be Wise" and the incredible "Steeler." Older songs that I was about to discover were "Running Wild," "The Ripper," "Genocide," "Tyrant" and "Green Manalishi." On my next trip to Paul's Record Hut I picked up British Steel and Unleashed In The East. For years I always wondered what happened to that WLIR broadcast. I never saw it as a bootleg but never looked that hard for it either. Then, the other night, I just typed Judas Priest WLIR into Google and there it was. I sat and listened dumbfounded once again as it all came back to me. Normally I don't write about bootlegs for Ripple but the CD cover clearly states "Not For Sale - Only For Fans." It's a great performance and the band is fired up. Judas Priest was not yet a huge arena band in 1980 America and the 2,000 or so metal maniacs at the Calderone deliver the goods big time.