Damnations Hammer - Disciples Of The Hex 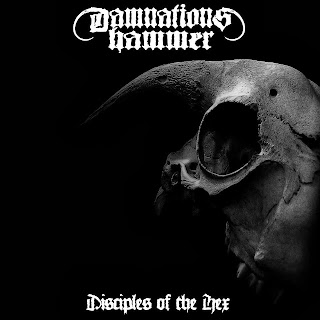 Formed in 2007 this English trio certainly took their time to release Disciples Of The Hex. Recorded in their own studio and self-released in 2012 the album caught the eye of I Hate Records who picked up these doomy deathsters. Re-recording some parts and touching up the production slightly, this homage to H.P. Lovecraft, Robert E. Howard and The Necronomicon was released by their new label in 2013...and I am loving it!

Picture yourself trapped in a 5x3 feet box. It's pitch black, hot and confined. Eventually darkness starts to get the better of you and claustrophobia sets in. Somehow you manage to keep your composure until the sounds from Hell are unleashed upon you. Damnations Hammer's Disciples Of The Hex is the ultimate soundtrack your nightmares and there's no way out. As soon as instrumental opener Defiance Of Retribution starts life as you know it is no more. The gates of Hell are opened wide and Satan is coming for you!
Slow and doomy with punishing riffs Throne Of Fire eventually explodes with an air of early Kreator. It weaves back and forth between these two styles and it simply crushes. The title track, Disciples Of The Hex ups the tempo slightly and a very nice Celtic Frost vibe enters the fray which will remain throughout the whole album. And that works fine with me because Damnations Hammer knows how to blend their own stuff with their influences. Also what really sets them apart is guitarist Tim Preston's voice. It's desperate, haunted and plain evil. Not necessarily the greatest voice out there but he puts so much power and passion into it which makes it very good. He has the ferocity of a deranged preacher and that really brings out the evil the band writes about. Full frontal heaviness comes at me in Serpent's Wrath. Brutal chugging riffs fight the punishing drums to pummel me into submission.

Impaled On The Horns Of Betrayal goes for the jugular right off the bat. Keeping their heads down the guys burrows deep and simply annihilates anything standing in their way. Giving me a slight respite with Harbringer Of Darkness Damnations Hammer never stray from evil and here they conjure the dark lord via chockful of riffs...and rise he does! Totally different than the other songs on the album is The Hex II. Performed on guitar by Andy Whitehead - bass guitar, guitars - and recorded into Riffworks where it was reworked and sound effects added making this segue very creepy and horror-riden! The last song Gates To The Necronomicon picks up where The Hex II ends before the band kicks into gear. They opt for power and riff the hell out of me instead of taking of at warp speed and that is a smart move. Almost trance-like in parts it is very suggestive and trippy in all it's heaviness and that wouldn't have worked as a fast song.

These guys have accomplished something very good with Disciples Of The Hex. Where so many bands only copy other bands trying to ride that fame wave with little to show for it, Damnations Hammer know real well how to mix own stuff with borrowed stuff and record some awesome stuff. While I am transported back to my youth I still have one foot in present day as I try to avoid being mangled by the horrifying maelstrom these British gents invoke. And  I can feel the mighty Chtulhu breathing down my neck.

If you favour old-style evil metal a lá Celtic Frost and Kreator this is definitely a must for you. Never holding back Damnations Hammer plug it in, crank it up and go totally medieval on us. Showing no mercy at all this is how this kind of heavy metal should be played. Go for feeling and go for the balls is the mantra and hell it works so well. So do like I do...I hit play and go fucking bonkers listening to Disciples Of The Hex.