Traveling, Broke, and Out of Gas - Till The Days Return 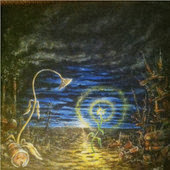 Today’s review takes us deep into the Midwest’s rows of corn.  Based in Lafayette, IN  (That’s Purdue University for sports fan and engineering students) since 2006, Traveling, Broke, and Out of Gas has been concocting their own down home brew of rootsy, slightly rocking, Americana.  Fronted by the husband and wife combo of Cody Hall and Rachel Yanni, the band is more like a family of Gypsies than a pre-defined musical line up as one might expect.  Their latest roster for their ambitious new record, Till The Days Return,  is rounded out by long time bassist Davide Marzoli, guitarist/fiddle player Craig Stinson, and violinist Sean Holman.

Till The Days Return is an ambitious 14 song record.  Originally conceived in two parts; a traditional string band/bluegrass set of songs and a more honky-tonk (with the occasional psychedelic texture) set of rock songs to be exact, Till The Days Return is presented as a story of traveling (metaphysically?) lovers...go figure.  The record is a nice blend of styles for sure.  Rachel Yanni’s voice has grown considerably since their last record and Cody’s acoustic driven songwriting seems to expand at an exponential rate.  Recorded at Sound Logic Studios, the band has achieved a clean sounding record that is quite believably a live in studio sound. It’s also a much bigger sound for the band which can only be gained by a steady regimen of practice and live shows and maybe a few Tom Waits records thrown in for good measure.  Stand out tracks include the reggae-esque driven King Ludd (and it’s rather unexpected Carl Sagan soundtrack style psychedelic drone out turned  Ken Kesey speed rap) which really sets up  the albums brightest moments, catching stride, as they segue into the super groovy The Thirst, the aforementioned Tom Waits atmosphere of Cheap Thrills, and beautifully minimalistic Gm Waltz.  Theres a little bit of everything on the record, so to speak.

Till The Days Return is a great step forward for Traveling, Broke, and Out of Gas.   Fans of the “Muddy Roots” scene as well as the more traditional roots music can equally enjoy the record.  From their rough start as a busking duo to an orchestrated traveling roots band, Traveling, Broke, and Out of Gas have set themselves up for another round of heavy touring that has served them well before.  Midwesterners, catch this band as they establish themselves as a regional/festival act.  Everyone else, give the record a spin.