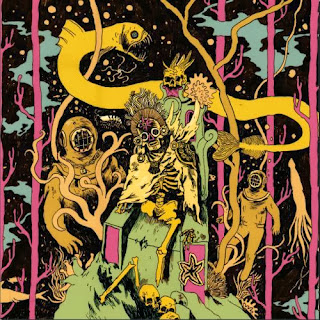 At the time of writing this review life has been hectic for me to say the least. On the verge of a full-blown overload this split found it's way to me and this exactly what the doctor ordered and then some! Somehow these two excellent Dutch bands manage to keep it mellow, trippy and soothing while being heavy as shit at the same time. After every spin I feel like I've been put through the wringer yet I feel invigorated, calm and relaxed. There's no other way to put it and whichever way I look at it this spilt is the ultimate chill-out and turn-it-up to-11 wax!

Rotterdam's The Machine kick starts the proceedings and they are in great form as usual. Going heavy on fuzz and reverb mixed with a shit ton of groove and psychedelica, they transport me somewhere else, somewhere in between and amazingly nice. The three songs they offer here - Awe, Not Only and Slipface are everything I except from The Machine. Nothing is forced or contrieved, instead there's such a nice flow that makes their music so vibrant and alive. To me a lot of times Hans van Heemst plays his bass guitar as a lead instrument along David Eering's guitar which creates a strange but very cool sound...call it The Machine Sound if you like.

Fellow Dutch stoners Sungrazer are a band I had heard about but never listened to. But man they are great so I am very happy I finally got to. They fit the mold of The Machine real well but are more jazzy than their fellow compatriots. Don't get me wrong because these guys are trippy as hell and they really step out of the box to play some awesome jams which is what I love about stoner rock. However, they do have more of a jazz streak in them which isn't bad at all because it works really well the Palm Desert influences. Their three contributions - Dopo, Yo La Tengo and Flow Through A Good Story blend into each other perfectly creating almost a three chapter story while still remaining perfect as individual pieces as well.

Fans of acid-blues, stoner and jam music should definitely obtain a copy of this amazing spilt. But this works great for anyone who wants to chill because all six songs on this wax are simultaneously heavy as led and mellow and trippy which in turn offer the perfect catharsis. Whatever state of mind you're in it will make you feel better. Both bands take this kind of music to a whole different level and deserve all the recognition they can get. Sadly Sungrazer broke up in July 2013 but don't let that discourage you from obtaining this split or any of their other releases. The Machine are still going at it so check their amazing albums out.