Sunday AM Album: Bela Fleck And The Flecktones - Left Of Cool 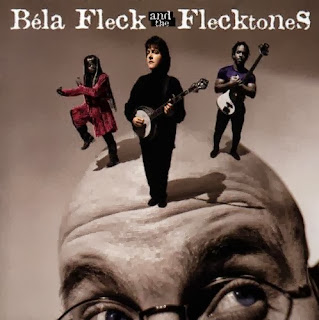 The assignment was to write about an album perfectly suited for a relaxed Sunday morning.  Sounds perfectly straightforward to me.  Now let me think.  What do I tend to listen to on Sunday mornings?  Something heavy and aggressive.  Dangit!  Okay, don't panic.  You can salvage this situation.  Just think about all the nice, pleasant music that you've enjoyed over the years.  Aha, I've got it!  I'll write about the first Bela Fleck And The Flecktones album I bought entitled Left Of Cool.

First and foremost, how in the world have I not written something about The Flecktones yet?  These guys are custom made for a site like The Ripple Effect.  It's true that the group has received much in the way of critical acclaim including multiple Grammy awards, yet I would venture to guess that at least eight out of ten people have never heard of them.  Hmmm, I wonder why?  Oh that's right!  It is impossible to pigeonhole The Flecktones into any specific genre let alone radio format.  In other words, they face an almost vertical uphill battle when it comes to gaining mainstream acceptance.  Let me tell you waveriders, the mainstream doesn't know what it's missing!

I recognize that I just told you The Flecktones essentially defy categorization...but I'm going to do my dead level best to categorize them for you anyway!  Bela Fleck And The Flecktones play jazz music.  At least in a retail setting that is the section you can find their CDs filed under.  To be more accurate I would describe the music on Left Of Cool as a mix of jazz, bluegrass, folk, pop, a dollop of funk, and worldbeat.  It's completely understandable if you don't believe those genres could interact well with one another, but I'm here to tell you that after just one listen to this album you too will be preaching the gospel.

Why does this multi-genre mashup work so flawlessly?  It comes down to the virtuoso musicians producing the music.  Bela Fleck, to quote his wikipedia page, is "widely acknowledged as one of the world's most innovative and technically proficient banjo players".  I couldn't have said it better myself.  Hence the copy and paste.  Victor Wooten is one of the most awe-inspiringly fantastic bass players that I have ever listened to on record and in concert.  His brother Roy "Future Man" Wooten is the group's drummer/percussionist/occasional vocalist.  Sounds normal right?  Wrong.  Future Man, wanting to see if he could play drums on guitar, invented what he calls the SynthAxe Drumitar.  This is an actual SynthAxe once owned by Lee Rittenour with all of it's electronics stripped out and many, many pressure sensitive programmable electronic triggers placed all over its body and neck.  Thus, he can play drums on a guitar.  Rounding out the crew on Left Of Cool is Jeff Coffin, a superb saxophone player who was the first musician I knew of who could play two of them at once.  Never mind the fact that he has a fine ear for melody and is the perfect compliment to the other players.

Waveriders, I can't recommend Left Of Cool highly enough.  This music is inventive, innovative, and imaginative.  If you didn't know about The Flecktones prior to reading this I can virtually guarantee that you have never heard anything quite like them.  Take a listen to the two songs I've linked to below and you will see what I mean.  "Throwdown..." will get your feet stomping and your head nodding.  "Sojourn..." is so soothing it should come packaged with aloe vera gel!  Sunday AM album indeed!  I love this band!


Throwdown At The Hoedown