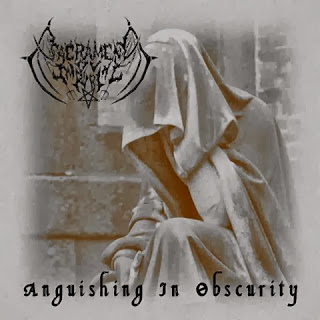 This here is some pure black metal that you don't want to miss out on.  It's just as simple as that. You could call it your father's black metal, but I'm not sure the genre has been around quite that long, and I don't want to get into some boring ass debate about that, either.  Trust me on this.

Sacrament Ov Impurity hail from the northern reaches of Washington State, and this is their second release.  If you like raw, brutal, blazing, blasting black metal, this is your jam right here.  From the opening notes of this album all the way to the end, this band takes no prisoners and offers no quarter.  You're either with them or against them and they couldn't give a fuck either way.  They do their thing and do it quite well.

Their thing is old school black metal.  There are no breaks for atmospherics, this is never going to be described as “post” anything.  It is raw and unrelenting, full of blast beats and tremolo picking and vocals that sound like someone is being tortured to within an inch of their life.  And suitably old school, the vocals are somewhat buried in the mix, as they should be for this flavor of black metal.  It lends to the hellishness of it all.

There is just enough variety, just enough change up in tempo, to allow the band to show that they have some skills, some abilities, some range to what they do.  “God Ov This World” absolutely pummels you from note one to open things up, and there is no slow down for the second track, “The Throne Will Burn”.  You are allowed a brief respite with the third track, “Under A Moonless Sky”, but then the pace picks right back up with “Upon The Wretched Tomb”.  Just marvelous, frenetic stuff.  The title track comes next, a 10 plus minute masterwork that really lets these guys show what they can do.  A forlorn drumbeat starts things off, it builds slowly, then the track blasts off for a  bit, only to unwind in a most excellent way.  “Darkness Everlasting” wraps things up quite nicely, and I'm sure the song title is there to let us know exactly how this band would like to see the world.

This band has started to build a good name for themselves up and down the West coast, so keep your eyes peeled for the opportunity to check them out live in your town.  And do what you gotta do to search out this album.  It is self-released but in this day and age in which we live, that is really no obstacle.  If you are a fan of all that is “trve” and “cvlt”, you need to have this one in your collection.