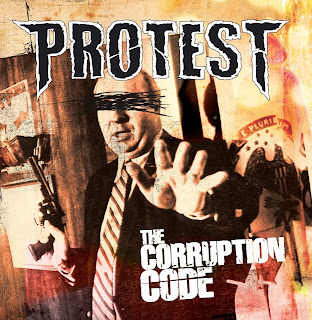 Normally, I’m a pretty happy guy. Very little gets me down and I can generally look at the world from a balanced perspective. Today is not one of those days.

Today is the day where I would like to see every human being have their fucking eyes torn out of their skulls with my own less than nimble fingers. I want to see people’s flesh being systematically peeled from their bodies and then forcing those same fucks to eat it. I’ll even season the shit for you. A little salt; maybe a little pepper; ooooooh, how about some fucking tarragon! I want to go out and cripple motherfuckers right now. Just walk up to a complete stranger and bludgeon them on the kneecaps with a lead fucking pipe. Today…..Pope doesn’t give a fuck.

And my soundtrack? Oh yeah, you’re the last to feel my wrath because you’re, at least, bright enough to figure out that if I’m talking about this shit, it must be the shit that I’m listening to. Kudos, fucker.
Yes. Protest. A Dallas, Texas five-piece that has provided the perfect elixir for my pent up rage. It’s metal, so if that turns you off, go away. Don’t worry. I’ll find you later and commit some horrific act upon your personage. The music is flavored in old school thrash, but with a ton of modern day hardcore and aggressive passion. The Corruption Code is laced with all the violence that you might expect, and also with a massive dose of class act musicianship, and like the early days of thrash, these guys are making a social statement. Lyrically, they’re pointing out the injustices of our system and the flaws in humanity, not singing about toxic waltzes or life in the gutter or some whacked bullshit. Their anger comes from sitting on the sidelines with their eyes open long enough to realize that the world is fucked.

Here, listen to “Fueled By Hate”, for instance. It opens with a classic chugga-chugga that immediately gets the head bobbing in time, and listen as vocalist Jason Burris belts out his dissatisfaction with being pushed in the corner, being ignored, being force fed the same bullshit for more than a hundred lifetimes….the rage comes out in this one. Great time changes on this track, shifting from that great up tempo thrash to a grinding mid tempo gallop that jerks the body into motion. I’m feeling you, brother….I’m thinking this is the song where I crack someone over the skull with a sock full of quarters and then I repeatedly beat them comatose with their own shoes.

“White Noise” starts off by telling me to resist the will to hate….and those who know me recognize that this is one of my positive traits. But today….today is a different day. This tune has that great plodding riffage running throughout, somewhat slower, but possibly the most menacing. Great dynamics in this one as the guitars give the rhythm section time next to the light of the funeral pyre. I’m picturing myself using the strung up corpses of our nation’s Congressional leaders as piñatas on this track. Louisville slugger in both hands repeatedly wailing away on the chain suspended naked and bloody husks of humanity hanging from a warehouse ceiling. This song is simply violent. I fucking love it.

“Killcraft” (today’s title of the day), is a rip roarin’ slamfest of speed metal chaos! The speed on this one harkens back to the days when Slayer was the fastest band on the face of the planet. But the highlight of this one is when Protest hit the break at the midpoint, grinding down and giving us a riff for the ages. I love the little technical flourishes these cats throw in the middle of their stuff, as well….crazy ass riffing in the left speaker while the guitars in the right speaker are laying down a sparse layer of distortion. Little things, man. You don’t have to have everyone in the band playing a million miles an hour. Fuckin’ break it up and let the fuckin’ song breathe from time to time. What am I doing in my violent fantasy during this song, you ask? Sizing my bookshelf for your skull. Thanks for asking. Mind your own business next time.

Look, fuckers. Protest may not be the most unique metal outfit out there, but they do their shit really fucking well. The Corruption Code is a clinical display on what it’s like to mash up yester years thrash metal movement with today’s burly knuckle-dragging hardcore sounds. It’s aggressive, it’s abrasive, but laced with great moments of technical prowess that a lot of these new kids seem to be missing. You can yell at me all you like, but if you don’t have anything substantial to say, I’m gonna ignore you. Protest are in touch with our nation’s current fucked up mindset and are shining a spotlight on it. I’m good with that. If hippies could rock our nation’s policies in the 60’s and 70’s, then bands like Protest should be able to bring greater change. Oh right….you fuckers need to put down your phones and iPods and other electrical opiates long enough to pay attention, fuckin’ bunch of gnats. Fuckin’ oughta bug-zap the whole fuckin’ lot of you.

Go out and support these guys….so sayeth the Pope.

Disclaimer: Pope isn’t usually this grumpy or negative. Y’all just got him on a really bad and dark day. Carry on.
https://www.facebook.com/protestband