Nymf - From The Dark 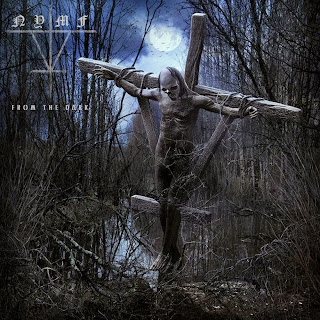 Not extremely active on the recording front since the members are all active in other bands, most notably singer Niklas Sjöberg and guitarist Martin Fairbanks who are in The Graviators and guitarist Kristofer Stjernquist who is in Seeds Of Cider and Trollfnask. However they have finally released their second full-length, From The Dark, via Transubstans Records. A collection of thirteen riff-soaked songs in the vein of especially Black Sabbath with a pinch of Pentagram but also stoner rock and heavy metal with occult lyrics is what they offer and damn, it's so good folks! Apart from the intro Heleionomai(Prelude) it's full tilt from the word go as the band go from strength to strength with each song.

As Heleionomai leads into Fear Of The Doom there is no turning back. In their quest to narrate about the dark lord Nymf takes me down dark passages and alleyways I never knew existed. Guided by their brutal riffs I duck and dive trying to avoid the evil forces and entities that are coming at me ceaselessly. The riff-attack continues in Possessed. Holding back on the tempo occasionally they go for force until the drums kick and pounds me into the ground and the onslaught is on. Evil pours out of my speakers as the creepy, eerie tones of Black Core takes me further into the realms of the dark one. Evolution Blues ups the ante slightly as the band delves deeper underground. Niklas voice has a desperate, haunting vibratto to it which bring out the fear of the unknown.

Niklas' haunted voice is even more enunciated Thin Ice especially in the verses. Those parts are slower with basically drums and soft guitars which enhances his singing creating old-style horror movie vibes, and not forgetting the fantastic guitar solo in the second half of the song. In your face full frontal attack is on the agenda as Postmortem annihilates. Pure heavy metal folks and it's awesome. Drive keeps the speed although doom is the chosen flavour as Nymf continues to piledrive me into submission. Never giving me a chance to recuperate and breathe Lucifer Takes The Crown brings me down to the depths of Hell where I lay weakend at the feet of the horned one.

Bringing back to life the original Dracula, In The Name Of Vlad beautifully depicts the horrible existence of the deranged Romanian voivod Vlad Tepes and true to that man, this song is dripping with blood and terror. Never losing their stride they launch into Your Soul Is Mine. Like a stampeding juggernaut NYmf are relentless as they do claim my soul. Ending the album in fine style with The Greatest Burden it couldn't be a better choice. Not only does it end From The Dark it also leaves a great opening for a third album. And needless to say it leaves me wanting more.

Their modern take on heavy occult rock sans organs but with chockful of riffs instead is a great homage to the pioneers of the genre and they certainly know how to bring fear into their songs. From it's founders Black Sabbath all the way to present day what is called doom has always had a God-fearing aspect to it, as do Nymf somewhat have. Although they change it up quite a lot by representing the other side. By doing it this way From The Dark is a two-story affair in lack of better words. Moving back and forth between God and Satan gives the album a natural flow and a nice twist subsequently pushing the genre forward a notch. Jävligt bra jobb gubbar!