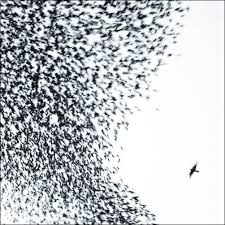 On a Sunday morning sidewalk,
I'm wishing, Lord, that I was stoned.
'Cause there's something in a Sunday
That makes a body feel alone.

Sunday mornings.  Once a day for waking up and getting some ol’ time religion.  Now, a real day of recovery.  Lonesome feelings, maybe regrets, and usually a persistent buzzing in the rusty noggin.  Sunday mornings can be real drag.  I’m the cleanest dirty shirt wearing kind of guy.  The beer I had for breakfast...well, I’m not quite there.  But there is a way dealing with it all.

If there was one record that I could listen to for the rest of my life, it very well might just be Wilco’s Sky Blue Sky.  For those real moments of low light creeping through the cracks in the blinds, piercing the darkness that is receding as the coffee percolates, this is the album that brings me out of it all.  The perfect way to start the slow slide to Monday.  Bring on the coffee and cream.  This is the journey.

“Maybe the sun will shine today.  The clouds will go away.  Maybe I won’t feel so afraid” gently sung over beautifully arpreggiated chords.  Maybe the most gentle introduction of a record one could asked for.  Like a subtly electrified Willie Nelson, brilliantly melodic and slowly intensified, Sky Blue Sky starts of deceivingly down-tempo.  Ok, we’ve started the first cup.  Daylight becomes relevant.

“Why is there no breeze, no currency of leaves?”  Up until this point, the debut of Nels Cline as a dominating force of modern guitar playing has not quite manifested.  During the first two songs he weaves in and out of the foreground, but with great reserve, never quite pulls the trigger...until now.  BAH-DUM!!!! Take that mellow, laid back California AM rock.  “I have no idea how this happens.  All of my maps have been overthrown.”  Blazing guitar work with enough gusto to drop the jaw of the proudest naysayer (Woody MacDermott, I’m looking at you) on top of a seriously solid, upbeat mid-tempo groove.  Damn, get it guys.  Don’t stop.  Once again, the masterful pacing of these songs is nothing short of brilliant and Nels Cline does just that.  Like a prize race horse, he doesn’t wear himself out, but the notion is there like a hustler who just ran the table on you.  This one is far from over.

“The drunks were ricocheting.  The old buildings downtown, emptied so long ago.”  Sky Blue Sky...lonesome, familiar.  “With the Sky Blue Sky, this rotten time wouldn’t seem so bad to me now. O, I didn’t die, I should be satisfied I survived.  It’s good enough for now.”  How do you top that on a Sunday morning coming down?  It’s alright, it’s just a reminder.  Things are about to change.

And then there they are...beautiful dual guitar harmonies.  Psychedelic, clear, piercing.  “Say what this means to me.  I do what I can.  Impossible Germany, unlikely Japan”.  What?  Who cares, it’s beautiful. Jeff and the boys set up the most amazing syncopated Allmanesque groove laid down on a contemporary record this side of a decade.   While the incredible organ and rhythm section keep this one alive, Impossible Germany has found its way on to many guitar players list after witnessing its fireworks in a live setting.  Nothing short of brilliant fretboard mastery.

Cup two.  Getting close to the halfway mark.  Drum roll please...”Tires type black, where the blacktop cracks, weeds spark through, dark green enough to be blue.”  Side With The Seeds takes a minute to show it’s true colors...and then they do it...again.  Serious groove, heavy, and there’s Nels sounding like a demented Neil Young, overdrive on....singing with his six strings.  The Dead only wish they could build up to something like that without getting strange.  Back to earth again.  Second verse...a lot like the first with different words, setting up Nels to announce to the world that there is a new sheriff in town.  Seriously...I can’t explain it.  It’s like a perfectly timed intimate encounter that is only properly topped off by smoke.  He even pulls out in time...yeah, I said it.

Speaking of The Grateful Dead...song 7, Shake It Off...somewhere between Zappa’s zany syncopated lines and Jerry Garcia’s nasally vocal delivery, Jeff Tweedy pulls out the greatest, mid-stoned out record instructional song I’ve ever heard.  I’m telling you, this record is perfectly paced.  “Like a giant beast with many souls, now just a body full of holes”.  Serious contemplation...SHAKE IT OFF!!!  Nod your head a little, get the blood flowing.

“I try to stay busy.  I do the dishes, I mow the lawn.  I tried to keep myself occupied, even though I know you’re not coming home.”  Again, Jeff Tweedy sets the tempo with pacing known only to great painters and chefs.  Man, I’m getting hungry.  Bacon and eggs?  Nah, Bs and Gs, duh.  There is work to be done.

Or....”Leave me (like you found me”.  The melancholy is in full first.  Need we wallow in it?  We were just starting to get cooking?  It’s a beautiful song and is the key to the whole second part of the record.  Another beautiful example of the fine pacing this record exemplifies.  It’s good to clear your ears before diving right back in.

Ladies and Gentleman...it’s all down hill from here.  You should be caffeinated, fed, dressed, and morning chores down.  A little time to boogie.  Like a slightly lethargic Leon Russell, “the more I think about it, the more I know it’s true”,  Walken...bam...can you not dance to this?  Ba dump, ba dump, ba dump, Ba dump da, ba da da dump ba.  Kind of like a surprisingly solid kick to the head, Wilco turns on the full tilt boogie, lap slide slinking, and slightly frenzied break down...elegantly.  I dare you to find a one note groove that is more exciting.  If you are doing this right, your heart rate should be slightly elevated.  You’re welcome.

But...”If you feel like singing a song, and you want other people to sing, just sing what you feel, don’t let anyone say its wrong.”  Fine words on a Sunday morning.  Don’t follow crowd.  It’s a good day for that.  The sermon...”If you are strung out like a kite, or stoned awake in the night.  It’s ok to be frightened....there’s a light inside of you.”  Sentimental?  Maybe, but I implore you, if you are feeling down, throw What Light on any day.  The Americana gospel is good for the soul.  “Don’t get uptight”.   What’s left?

This... On and On...kind of indie rock with a subtle proggish guitar line.  It picks up and leaves off with the “it’s all good” kind of thing feeling that is the only logical way of landing this Sunday morning haze of an album.  Now for a clean shirt and a cold beer.  Cheers.