Marillion from a Swedebeast's point of view, part 3: Marillion - Fugazi 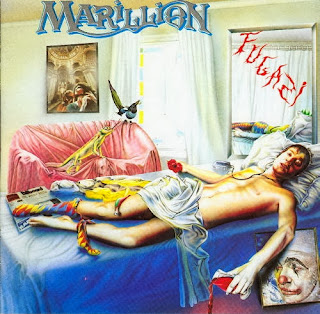 Drummer issues finally solved after an ill-fated stint with Jonathan Mover lead the band to hire Ian Mosley which in my opinion was a very wise move. Not only because the revolving drummer door-policy effectively ended but also because he is a great albeit criminally underrated drummer. Still there was problems within the camp, we are after all talking about Marillion. This time though it was studio difficulties that thwarted the band for a while. Eventually those issues were resolved and Marillion's second album, Fugazi, saw the light of day on March 12th 1984.

This was the first time I heard a Marillion record when it actually came out and I clearly remember how floored I was by Ian Mosley's percussive work in the beginning of opener Assassing. His machine gun-like salvo mixed with Middle Eastern flavours builds up the song until the rest of the band joins in. In terms of Marillion this is a very heavy track that I am pretty sure shocked some fans. Despite all the line-up problems they had had up until now, you can tell Marillion had grown immensely. They are much tighter and focused which of course helps to lift their songs to a whole new level. Speaking about themselves the track is about how they fired Diz Minnitt and Mick Pointer in order to progress.
Taking the tale of the Punch and Judy dolls and making it their own, Marillion depict a marriage gone bad and the husband has turned to violence. Where they once lived the life of their dreams, the couple live in nothing but misery. For the most part Punch And Judy is a mid-tempo song but Fish spits out the chorus with such venom and bile it feels as I'm there observing it first-hand. Ian's super tight and hard-hitting percussive work highlights the bitterness and resentment even more.
Jigsaw follows along as a natural progression to Punch And Judy lyrically while musically a slow introspective tone sets the mood immediately. A solitary Mark Kelly keyboard backs Fish up as he sings about the type of doomed relationship that breaks up only to get back together again...over and over and over this is the ricochet. The only time the couple comes to any kind of realisation of their failed relationship is in the chorus but like always they quickly forget. An amazing gut-wrenching solo by Steve Rothery caps the hopelessness of the story.

Starting off in an explosive manner where Pete Trewavas bass line is skull shattering - which it is throughout the song -  Emerald Lies slows down a bit before picking up again. And this change in tempo works great since the track is about misguided accusations and the repercussions it brings. Just like an argument it weaves back and forth until it dawns on the accuser..."I was wrong" but by then it's too late. The damage is already done.
She Chameleon brings back Marillion's progressive leanings. A repetitive church organ plays in the background while follows along nicely through shifts and changes. To me though that church organ is the key. Since the song is about groupies which swarmed around the band at this point in time, the organ represents their collective conscience as they break their own marriage vows(most of the band were married at this point). At the same time it poses the question who uses who...so was it just a fuck, was it just a fuck, just another fuck I bled.
The band is relentless in Incubus where once again a failed relationship is portraited. Not the usual kind though as we get to follow a porn actress who makes the transtition to the big stage. Hiding her past well standing in the spotlight one night she sees her former employer in the crowd. Everything from back then comes flooding back and her once prosperous career comes crashing down...all while the porn director laughs at her misery.
Ending the album with Fugazi which is about Fish observing the world we live in and how fucked up it is while being on an acid-trip. Weaving back and forth between tempos just like how a tripping mind perceives it's surroundings Fish comes to the conclusion that the world is totally Fugazi. Rothery's guitar playing is outstanding as always but here he really excels, especially the solo which is something else.

Past and present Marillion have always been masters at describing human interaction and relationships of all kind, about good ones but mainly about bad ones. Somehow they manage to look at it from many different angles making their songs speak to everyone. However, I dare to put my two cents in claiming that Fugazi really is a concept album about all the mistakes and bad decisions people make in their lives. It was never intended to be one but the way the songs are, what stories they tell Fugazi became the greatest unintentional concept releases of all time.

For all you anoraks out there, yes I am one myself, there is a strong link between the covers of Fugazi and it's predecessor Script For A Jester's Tear. Lay these two magnificient pieces that Mark Wilkinson made side by side and you'll see what I mean. Whereas Script...is in a tiny apartment with scattered and random items  with Marillion's trademark jester in full regalia, Fugazi on the other hand is in a big flashy hotel room. It's to the point very impersonal, non-descript but very expensive as if the jester, i.e the band has finally made it. But the jester is passed out undressed on a bed and clearly just as bad off as before stardom struck....oh and the famous magpie made it's first appearance.

Fucked Up Got Ambushed Zipped In, i.e. Fugazi is an amazing album and definitely one of the best Marillion has ever released. Since they were so much better musically by now this one should really be my number one but Script Of A Jester's Tear still holds that spot. Although it is kind of futile of me to categorize them like this because all their albums are very good. What else can I say? Oh yeah, play this and let the world of Marillion embrace you. Despite the sad stories they tell their songs are beautiful creations.