Left Lane Cruiser - Rock Them Back To Hell 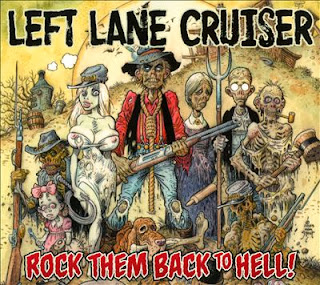 First and foremost, I’m a big fan of Left Lane Cruiser.  These guys are the real deal man...and they are damn fine Hoosiers to boot.  I believe my respect for the loud ass fuck bloozed out duo began when I realized they represented Indiana proudly.  Someone has to.  Regionalist patriotism aside, Left Lane Cruiser gives any rock band a run for their money, sitting down at that.  Their studio output has been consistent and quality from the beginning.  And goddamn it if you don’t learn a few music lessons along the way (Chuck Berry, Tom Petty, and Jimi Hendrix all get name checked with tasteful homage throughout the record).  I see no problem in respecting your elders.

The Cruiser’s sound has become thicker as they have progressed as a recording group.    Alive seems to go for the bare bones, live in studio sound when it comes to the bands on their roster.  LLC still has that going on for them except they’ve added more production (which is a dirty word to a lot of bands in their “muddy roots” scene).  Squacked out, lo-fi roots music is cool...but there isn’t any of that to be found on Rock Them Back To Hell.

Freddy J IV's voice is getting a real nice seasoning, or patina if you will, from all of that hard living and touring.  It’s soulful like colored greens in bacon fat, full of down home flavor.  His slide guitar is a MEAN as ever and his choice of fuzz tones shows the carefulness of master painter choosing his pallet.  What I’m saying here is that the rough around the edges Left Lane Cruiser has worked into a refined machine on this record.  Brenn Beck is one of my favorite drummers (it takes a bad ass to cover When The Levee Break, a supreme bad ass to make it believable).  He’s bombastic as hell and smooth as butter all at the same time.  The years shared on the road have honed these guys into one of the most under rated rock and blues acts touring (which they are good at).  The
in-studio banter left in the mix makes the whole damn thing believable because to make a record as driving as Rock Them Back To Hell without wearing the listener out early in the game is nearly a super human feat.

Rock Them Back To Hell has basically startled me with how good it is.  Highlights of the album are...everything...especially Juice To Get Loose (check out some of that Indiana beer that is mentioned), Paralyze Ya, and Electrify.  It’s a class act and is most definitely going to rank high on the year end list that is quickly filling as we head into the final quarter of the year.  File under: Not To Be Missed.

Posted by The Ripple Effect at 9:20 AM