Inbellum - Are You Still With Me? 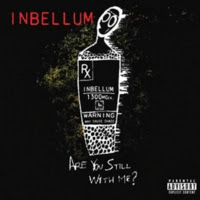 Over the years that we’ve been doing The Ripple Effect, and even well, well before that, there have been a billion bands that have come along that have mixed genres that seemingly shouldn’t be mixed. In the 90’s, specifically, we had rap and metal doing this mash up thing, and it started off well enough….who remembers Rage Against The Machine and the Judgment Night soundtrack? And before all that, Anthrax and Beastie Boys really paving the way? Of course, we all remember what happened after that and the bane of metal existence, Nu Metal. At times, it worked and when it worked, it had moments of brilliance. Unfortunately, the whole movement became more about posturing, image and the by-product of the Look-At-Me Generation. The substance of the music was lost and the movement suffered.

Then, along comes a little band out of Los Angeles called Inbellum. They really have nothing to do with Nu Metal or hip-hop per se, but they are doing this amalgam of musical styles in a way that I haven’t heard as of yet. Is it too early to call them pioneers? I don’t think so. They’re forging new ground and pushing the envelope of the music that has inspired them. Is it a fresh sound? Yeah. I gotta think so. Again, it’s not something that I’ve heard before and it makes me take a step back and assess, and actually become a little introspective. The music creates a movement within me, not just a physical movement of head bobbing and toe tapping, but a movement of the emotion….and as most of you should know about me by now, if music makes me feel on an emotional level, then it’s a winner.

Oh….right! The music. I haven’t described this sound yet! Imagine if you will….the cool summer sip of a refreshing beverage in the form of reggae mixed with the chaotic and stifling summer city night of heavy metal. Incredible moments of chill and subtlety blended perfectly with bursts of abrasion and aggressive angst. Inbellum have really captured my imagination with this debut disc entitled Are You Still With Me? On top of doing a great job of mashing up the two musical styles, this SoCal quartet have the musical chops….great guitar work; seamlessly shifting from clean tones to heavily distorted walls of noise, the bass being the focal point during the classic reggae sounds and bursting with a pulsating fire when the heaviness kicks in, the drummer provides a clinic; never over playing his parts yet throwing in just enough pizzazz to make sure you’re paying attention. And the singer! Damn….this dude does it all. He can belt it out with best metal howlers out there, and then downshift to that clean crooning approach, adding tons of melody throughout.

Are You Still With Me? is a twelve song epic highlighted by….jeez, I don’t know. All the songs? If I had to pick three songs, I’d go with “Tequila Sunset”, “Just For Today” and “Residuum”.
“Tequila Sunset” has that classic reggae groove, punctuated by the rhythm section and accentuated with the great vocals melodies, even as the music takes a progressively heavier tone during the choruses. It’s the kind of song that has me swaying at my desk, craving a rum based beverage and/or a spliff. The reverbed guitar solo has class, and love the way this guy can transition from that clean tone to the wall of distortion, and back again.

“Just For Today” is fucking killer! Massive amounts of low end and psychedelic guitar work kick this beast off, and then a steady dose of metal replaces it all and beats us senseless. I love it…they don’t rush the transitions of this tune, the boys let the song do the work, it all comes across very natural. The buildup, the release of tension, the cigarette at the end….a truly satisfying experience. I’m just trying to figure out who bought dinner…

“Residuum” is the album closer, and it’s almost like Inbellum saved the best for last. Kicking off with a bout of brutality before dropping down the grooved out reggae sounds, the vocals coming across plaintively, yet with an inner strength of conviction. Absolutely class song! I’d love to try and compare this song to someone else, but I can’t. It reminds me of nobody else. That’s a great fucking thing in my book. It begs the question, what musicians inspire these guys? Fuck it….I don’t care. I have this album in rotation and I’m inspired every time I hear this song.

Are You Still With Me? isn’t going to appeal to everybody, unfortunately. There are still way too many close minded metal heads out there to appreciate the complexity and the soul of Inbellum’s delivery. It’s too soft, they’ll say. What’s this reggae shit, they’ll bitch. The pure reggae fans will probably feel like their ears are being raped when the metal kicks in. Or, they’ll be too baked to recognize what’s going on and wouldn’t care otherwise. But, for a music fan, Are You Still With Me? is the kind of record that will keep them coming back for more, a record that will sit in the collection as a triumph. I personally love it and can’t wait to hear more from these guys. I want to see them on a big stage, a big tour, and winning over the masses. They’re underdogs, and I love me an underdog.

Are You Still With Me? Ha! Gentlemen….I never left!!!