Dustin Kensrue - The Water and the Blood 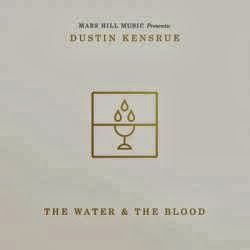 I have to tackle this one.  Dustin Kensrue, my living legend and musical idol, former front man of one of the greatest rock bands of all time (Thrice) and solo music master (his first solo release Please Come Home and his Christmas album This Good Night is Still Everywhere are masterfully written).  Here comes his third and most unique album of all… a praise and worship (????) album.

This guy is actually a legend to many.  Thrice has a huge and passionate following, and his music inspired many of the songs my band (Cover of Afternoon) writes.  So this album comes as sort of a controversy.  While Thrice and his solo works use biblical references and outright Christian lyrics, a praise and worship album is completely different.  I, for one, hate praise and worship music.  I appreciate its purpose, but I think it’s banal and repetitive.  It’s music made for the ultimate “masses”… a group of church-going old people.  Even the “youth-movement” of “hands-held-to- the-lord, yo” has some truly awful music.  Hell, when the Christian music industry produces a good band, they get slaughtered for being “too main stream to be holy” (see: Emery, Underoath, and to some extent P.O.D.,).  Whatever.

But Kensure is a different animal.  He’s an artist who wants to do what his heart tells him to.  For that, I decided to get this album the day it came out… because I trust him as a musician.  No matter what, a great musician is bound to make great music, right?

Now, I’ll finally talk about the music.  I know, I know, this is a music review… and here it is.  This is a mixed bag.  Truly.  The album starts off with exactly what everyone feared.  Banal and repetitive praise music.  It’s much better than the usual praise and worship drivel, and there is some really awesome stuff thrown in, like towards the end of “Rock of Ages”… there is some awesome dark guitar work in the background.  It’s like a sly “this could be in a Thrice song” part.

Then it moves into what I expected.  Amazing music.  Suffering Servant has amazing lyrics, music, and melody.  It could have been a Thrice song, easily.  Beautiful, beautiful, beautiful stuff.   My One Comfort is more like his first solo album, and it’s a nice up-tempo song that doesn’t drag.  God is Good is very much like an old Coldplay song (you know… when they were good).  While I hate the title, because if you search God is Good you get about a billion songs.  Again, the chorus isn’t great.  It’s repetitive praise music… but the orchestration is brilliant.

Then… back to some above average praise and worship (i.e. pretty boring musically… but again, better than most I’ve heard).

The Voice of the Lord… yeah, I don’t know what the f&%& to say about this one.  It’s loud and noisy at the beginning… and has a very epic chorus, and it’s very intense.  So I guess… It’s a Thrice-like song, and very well done.  It’s just weird with the lyrics.  They’re good, but it’s like traditional church lyrics set to an angsty and post-hardcoreish back drop.  It’s just weird.
Then… suddenly… out of nowhere, comes one of the greatest songs I’ve ever heard… period.

It’s Not Enough is a gorgeous march to an intense conclusion that brings out emotions in me that it has no business bringing out.  I literally get chills listening to it, and really feel the lyrics.  They’re Christian, but they are relatable to the everyman.  “Though I could live for all to lift them higher, or spend the centuries seeking light within.  Though I endulge my every dark desire, Exhasuting every avenue of sin, it’s not enough”, Kensure croons over haunting chords and delicate piano.  It’s just a simply stunning arrangement.  If you want to see why so many people think that he’s a vocal legend, listen to this song.  Please… do yourself a favor.  This song ALONE makes this album worth owning.

After that, it’s back to better than average praise music.

So what’s my verdict on this album?  As a music reviewer, I have a hard time here.  I love the artist with all of my heart.  I love that he’s doing what he believes in.  I love that he’s still making music.  Is the album his best work?  No.  In fact, it’s by far his worst, from a musical stand point.  I was raised in a church-going family and consider myself a “believer”.  So, no, this isn’t a slight at religion at all.
I firmly believe that music SHOULD be about what you are passionate about.  Whether it be God, or man, or money, or something far more sinister… your music is YOU.  And this album is Dustin Kensrue.  So I applaud this effort.

However, musically, I think he’s capable of so much more.  It’s Not Enough will go down as one of my all-time favorite songs.  Why didn’t he just write another Christian-lyrics centered masterpiece?  Why did he go with praise and worship, a genre that is made for the masses?  Well, he answers that question, and then some, in this article (http://theresurgence.com/2013/09/30/why-i-made-a-worship-recordbody).

For that, I give him the ultimate praise and respect.  Thank you Dustin Kensrue, for what you do, and for what you continue to do.

This album is a no-brainer if you’re into praise and worship… but of you’re into great music period, give it a listen, or at least purchase It’s Not Enough.  You won’t be disappointed.