Dillinger Escape Plan - One Of Us Is The Killer 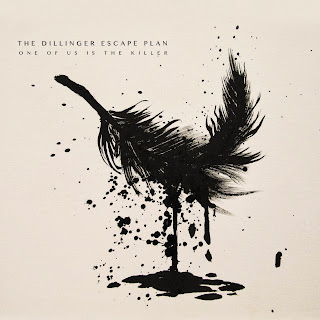 “I’m sure you’re all quite curious as to why I’ve asked you here this evening.  Looking around I see five stunningly blank stares on five perfectly tranquil faces.  Impressive.  Remind me never to play poker with any of you, but let’s get to the matter at hand shall we?  I’m sure you’ve noticed by now that one of the chairs around this table is conspicuously empty. It seems that late last night someone took it upon themselves to rid this mortal coil of our good friend Mr. Dillinger.  Based on your stoical reactions I’m going to assume that no one wishes to spare me the trouble and confess to this heinous crime?  Very well then.  Let’s talk motive.”

“I’ll start with you Mr. Hickok.  Everyone knows how fond you are of gambling.  It’s also well known how readily you pull out that pistol and wicked knife of yours if you feel you’re being cheated.  Tell me, did you participate in a card game last night that included Mr. Dillinger?  Did you discover that Dillinger was cheating or did you just lose your bet?  Nothing to say Hickok?  Fine, I’ll come back to you.”

“I see that smug look on your face Yuri.  Ever since you came back from your ‘BIG’ trip you’ve been a chore to deal with.  Look, I know Dillinger was no saint.  You two never got along.  He was always making fun of your accent and your suit.  That had to grate on you after a while.  Maybe you thought you’d be awarded another Hero of the Soviet Union medal if you offed him, eh?  C’mon Yuri, I know you can understand me.  Say something!  No?  Diplomatic immunity?  Not with me bub!  Not when…”

“Did I say something funny Bob?  Don’t think I can’t hear you snickering over there.  Nothing’s funny about this situation!  I’m glad you didn’t bring your golf clubs because we’re going to be here until I get some answers.  Did Dillinger ruin one of your specials?  Did he not fall for your song and dance routine?  Can anyone vouch for your whereabouts last night Bob?  Didn’t think so.  Not laughing now are you?”

“As for you Mr. President; don’t think I’m going to go easy on you just because I helped vote you into office.  Oh no!  I’ve talked with your Secret Service detail.  They bafflingly lost track of you last night from 8:00 PM to 9:30 PM.  That’s all the time you would need to eliminate Mr. Dillinger and get back to the oval office for your evening debriefing.  And don’t give me that ‘I’m too worried about the threat posed by nuclear weapons to do anything else’ routine.  It’s pathetic.  Just remember.  You don’t have to answer my questions, but you do have to answer to the American people and a lot of them loved Dillinger!”

“And don’t think I forgot about you Prancer, you envious little four-legged devil.  Word on the street is that you were incredibly jealous of all the attention that Mr. Dillinger paid to Rudolph and his bright red nose.  Hmmm?  Self-esteem issues?  Don’t bother responding.  That was a rhetorical question.  Honestly, I’m just trying to wrap my head around…”

“Penfold what are you doing?”
“Nothing sir.”
“How many times do I have to tell you Penfold?  The wax statues from the museum are not to be moved.  They are not toys.  They are valuable assets!”
“Sorry sir.”
“You’re sorry?  Penfold let me break this down for you as simply as I can.  You are expendable.  Those waxen simulacra are not.”
“It won’t happen again sir.”
“See that it doesn’t.  Now get these characters back where they belong.  We open in thirty minutes!”

Ah there you are waveriders.  Good to see you all.  I wonder if any of you ever get the same musical itch that affects me from time to time?  You see sometimes when I'm knee deep in new ear-pleasing music, or when I'm having a particularly bad day there is only one thing that will suffice.  I need to listen to something brutal and highly technical.  While I have been exposed to several bands that fit that particular bill, the one that I find myself repeatedly going back to is The Dillinger Escape Plan.  They have a new album on the market entitled One Of Us Is The Killer, and it is very good.

I first came into contact with DEP around 2002 when they released their Irony Is A Dead Scene EP.  My interest was piqued when I learned that Mike Patton performed the vocals on this release.  I listened to the music and to be perfectly honest, was pretty intimidated.  It was some of the most intense music I had ever heard.  Flash forward to 2004 and I picked up a copy of their next release Miss Machine.  I absolutely loved that album!  While I can't say that I enjoyed the follow up Ire Works nearly as much and I found reasons not to pick up Option Paralysis until very recently, I can say that with the release of OOUITK I'm 100% back to being an active fan.

In case I was unclear or you've never been exposed to this band before, DEP play downright abrasive heavy metal that is incredibly technical in nature.  Journalists invented a new musical subgenre to be able to categorize the band; mathcore.  What is mathcore?  Allow me to quote Kevin Stewart-Panko of Terrorizer magazine.  Mathcore is a "dynamic, violent, discordant, technical, brutal, off-kilter, no rules mixture of metal, hardcore, prog, math rock, grind and jazz".  Yep, sounds about right.  If asked to limit my description of DEP to one word, it would be chaotic.  To get the most out of this music the listener has to devote all of their attention to following the compositional twists and turns.  Passive listening is fine, but definitely not encouraged.

OOUITK wastes no time creating a suitable musical atmosphere.  The band immediately bombards the listener with the concussive blast of opener "Prancer".  With the discordant table set DEP moves onto my favorite track off the album called "When I Lost My Bet".  Every time I listen to this song I am terribly impressed with the fantastic musicianship on offer.  Those compositional twists and turns I mentioned before?  Yeah, look no further than this complexity seminar.  Proving they're not a one trick pony, title track "One Of Us Is The Killer" is built around highly emotive, almost tender melody lines and clean singing.  Of course there are explosive portions to this song as well, but that's a given.  Impressively no weak tracks mar the unrelenting intensity of this album, but of the remaining songs "Paranoia Shields", "Crossburner", and "Nothing's Funny" definitely stand out.

Alright waveriders.  Tired of listening to pretty music?  Bored of standard song compositions?  Do you want to listen to music that is frighteningly intense?  Maybe you're not having the greatest day?  If you answered yes to any of these questions you are in luck!  Just follow the youtube links below, risk free, and take a listen to Dillinger Escape Plan.  You'll be glad you did.

When I Lost My Bet


One Of Us Is The Killer