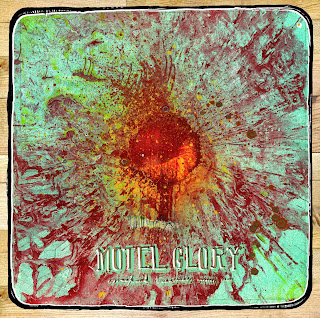 "With an ex-members-of genealogy that goes back to Clinton’s first term, and long-issued threats of “we will be in a band together at some point”, Motel Glory morphed into “mature” form in Fall 2011. Their debut LP (Weekend Treasure, Monday’s Trash) is available on vinyl and streaming everywhere. 60’s garage meets 70’s Hee Haw meets 80’s hardcore meets 10’s regrets with a redaction by 50’s Chuck Berry. Chaotic rock-and-roll that winks and screams."

As you've read by their bio, there's quite a bit to take away from this group. Interested, I had to listen to the whole album, twice. This is a fun album. It's very uplifting. Killer stuff indeed.