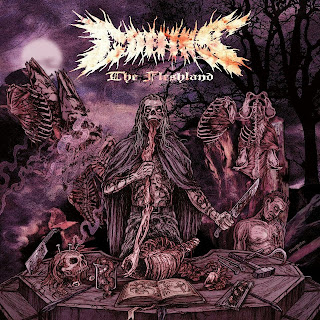 A rotten putrid smell emanates from the speakers when opener Here Comes Perdition unleashes the fury of the undead. After a short intro and the initial strum of Uchino's guitar Coffins throws us into the deep end of their deranged world. It's heads down, ferocious death metal of an exclusive kind, the kind that is excellent you hear! The Fleshland is not a case of reinventing the wheel but to carry on a great musical tradition in the best possible and that's exactly what Coffins are doing.

Call me old-fashioned and conservative if you like but I want my death metal a certain way. No I don't want it to regress and go stale, be innovative and improve things but there's a limit. Most new bands these days only focus on the technical aspect while adding too many breakdowns into their songs which is a huge reason why I haven't paid much attention to death metal bands formed after 2005. Yes I am narrow-minded when it comes to certain things but that's how it is. Therefore this new release from Japan's Coffins is a breath of fresh stale and foul-smelling zombified death. For the most part they play it old style but with a chewed-off arm of doom metal and a ripped-off leg of punk thrown in to bring out the foulness of this flesh eating offering better. And this album is a zombie apocalypse coming at you with one mission...to annihilate mankind!

It took me a few spins before I noticed a clever pattern in the song structure, a set-up that makes The Fleshland fluid and coherent in it's presentation. What Coffins have done is putting their doom influences in the longer songs and their punk influences in the shorter songs. Then they made a simple but effective move by putting one doom song first followed by a punk song. As they have elegantly mixed their death metal with these other two genres there's a fantastic red line permeating the song order...and that is air to breathe. Nothing comes out forced or contrieved, instead Coffins have a pure natural flow in their output.

For a band that has been around since 1996 having released 4 full-lengths does not seem like much. However, scratch the blood-soaked surface and you find a huge well of material since Coffins have appeared on at least 15 splits, a few EP's, singles, demos and compilations. Put in that light it doesn't come as a shock why The Fleshland is as good as it is. Thanks to the heaviness and the brutal lyrical themes I'm transported back to a time when death metal was death metal. And the bands gave fuck all about trends, they were out to kill and that's what Coffins are still doing.

Regardless if you're a starving death metal fan like me or fairly content with that genre's current style, The Fleshland is a must in your collection. Extremely well-played and beautifully crafted there's not much else to ask for. Just press play, let your hair hang down and start windmilling and trash your place foul-smelling pile of rubble!