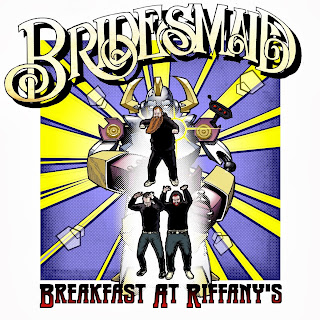 So, there's a facebook page named "Out of shape stoner metal dudes with beards." It's cool. The guy who runs it is in Bridesmaid. They sent out some vinyl pressings for review a couple weeks ago, and I was lucky enough to catch one. Unfortunately, there's so much low end on this record that my turntable turned into a black hole, so much gravity and such. But really, my little cheap amp couldn't push the bass.

See, there's very little guitar on this album, the band is made of a drummer, two bassists, and one epic beard. First thing I noticed was the song titles, they're amazing. Things like "Jakin' Care of Business," "Francis with Wolves," and "Surfin Zafari" just made me anticipate listening to the album. I downloaded it and played it, that way so I could actually hear it. I liked what I heard. This isn't groundbreaking stuff, but it's fun. Made for a good drive, and good grilling tunes.

My favorite track is "Surfin' Zafari," it feels like it travels, I always enjoy songs that have that forward-moving feel. Also, Francis with Wolves features Dallas Thomas (swan king/asschapel/pelican) and Aaron Vilk (Nyodene D), so that's cool stuff there too.

All in all, I enjoyed it. They're a cool band, they obviously like to have fun, and I always appreciate that.

Here are their tour dates, checkemout.