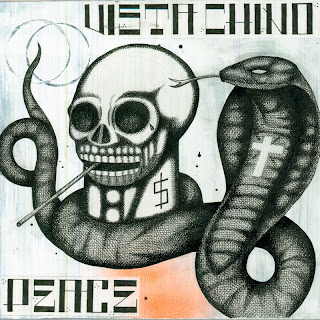 Well,  today we have a record that is bound to get as much attention as any other rock record this year.  Available August 30 through Napalm Records, Vista Chino’s “debut” record, Peace, has quite a legacy to live up to.

Ok...the story that you may or may not know:  Once there was this band from Palm Desert, CA.  They were called Kyuss.  Kyuss got way more popular after they broke up, but their guitarist, Josh Homme, went on to form Queens of The Stone Age...who are about as big as a rock band can get these days.  Kyuss’s singer, John Garcia, and drummer, Brant Bjork, went on to do a number of other projects John but got three of the four original members to play as Kyuss Lives! after some European festival gigs under the moniker John Garcia Plays Kyuss.  They got sued by two former band mates for using the Kyuss name.  So here we are now...Vista Chino.  Mike Dean replaced Kyuss/Queens bass player Nick Oliveri and Bruno Fevery has been filling Josh Homme’s place since the Kyuss Lives! shows.

As easy as it would be to compare the record to old Kyuss recordings, I’ve decided that wouldn’t be fair.  The Kyuss records were a moment in time and the rest of the world wouldn’t catch up until the moments were long gone.  Now the guys have kids and bills to pay.  The Kyuss records were made, more or less, twenty years ago.  Things have changed.  Still, one thing remains...it’s a lot better paying your bills with rock music than getting what the rest of the world would call a job.  There isn’t one reader who wouldn’t trade their day job for a chance at the life style.  So what?

Well, when it comes down to it, Vista Chino’s record is ok.  It’s not mind blowing.  That’s cool.  It isn’t without it’s merits and for those who have followed John Garcia’s career, it should be right your alley.  I’m not a big fan of Josh Homme (although I’m SLOWLY coming around), but the power of his guitar sound is obviously missing.  I say obvious for a reason.  Bruno knocks the old Kyuss material out of the park during the band’s live shows, but the studio magic isn’t there.  John Garcia’s vocals are kind of buried in the mix which is ok because with other recording, he can be a little abrasive.  Nick Oliveri’s bass lines are particularly crushing,  Mike Dean, who is no stranger to heavy riffing (his other day job is Corrosion of Conformity), definitely has his work cut out for him.  Brant Bjork’s drumming is spot on.  It’s my favorite part of the record.

There are some really nice grooves on Peace.  Planets 1 & 2 has some serious down beat manipulation.  Adara is really catchy.  Acidize - The Gamblin Moose gets into the most Kyussy territory with a “Born To Hula” sort of guitar rhythm.  However, nothing really grabs you with a “this is next level stuff” tenacity.  I’m glad I got to hear the record.  I was really curious how it was going to go.  I’m not upset I listened to it and I will probably listen to it some more.  It does grow on you.  It’s certainly better than anything that is on the radio.

All in all, I find no problem with John and Brant making a record and trying to keep their careers going.  That is what this record represents to me and they worked hard to get there.  I think Peace is a notch on stoner/desert rocks growth chart.  There are more exciting records being put out right now, but if Vista Chino took some time to get “Chinese eyed” like their new moniker might suggest, then some righteous jams may indeed happen for a second record.  One thing is for certain, for that to happen they need to stop straddling the past and the present and decide to move on musically speaking.