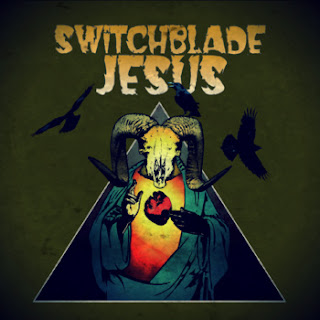 The drifter stands upon the horizon.  His faded overcoat blowing in the hot desert wind, the sun beating down upon his chapped and leathered skin.  Steely eyes scan from underneath the tattered brim of his hat, surveying the sun-baked ground and rolling tumbleweed.  The bleached skull of a bull lies half-buried in the gravel like an omen.  Revenge looms in the distant township.  Violence awaits.

Perhaps, no other band conjures images of outlaw Texas as vividly as this outfit from Corpus Christi, Switchblade Jesus.

Their sound is as dirty and dusty as a weathered Harley bar.  Their metal as rusted and grease-soaked as an aged motorcycle chain.  Their rock as vicious as a pissed-off Rattler.

Their bite just as deadly.

Beginning with the sanguine, starkly beautiful, gentle acoustics of "Into Nothing" the scene is set as our drifter emerges from the twilight of the surrounding desert.  He squints as he surveys the town, his holsters full of leaden death; his hands flexing and readying for the mayhem to ensue.

Switchblade Jesus waste no time in finding their groove.  As our drifter steps into town, marching down the dirt-paved main street, "Bastard Son" kicks in.  Simply one badass calling of mutated Texan blues-metal.  This song hits all the right notes, all the right moments, all the right dynamics, with it's slow build over a muted guitar riff, leading into a simply perfect drum fill and beat.  The song sways and glides as the vocals kick in with whiskey-burned ferocity.   The groove grows and the guitars build like an oncoming thunderhead  Our drifter, the bastard son, kicks open the bar doors amid a growing cacophony of crunching acid blues until the bar erupts in a fury of splattered skulls and rendered bodies. Our drifter isn't one for asking questions or making speeches. Like the music of Switchblade Jesus, he's direct and clear.   Once his prey is sighted, they're cornered and dispensed with with surgical precision.   Merciless and without remorse. Once the last bullet has fired, the barmaid looks up from the carnage around her, a growing swell of lust brewing for the badass who just cleansed the town of it's vermin.

There's no other way to describe it.  "Bastard Son" is the best stoner/doom/retro -- whatever-- cut I've heard all year.  No other song I've heard has that swagger, that build of dynamic, that damn sexy groove and that assaulting violence.  Already firmly planted on my Best of List for the year.

And Switchblade Jesus don't let up from there. "The Wolves" rages as our drifter mounts a stolen Harley and races out of town, one satisfied woman panting with spent passion amid the slaughter left in his wake.  "Sick Mouth" is the soundtrack of our drifter's hunting for the remaining members of the motorcycle club who'd done him wrong.  And the tale goes on from there, best left up to your imagination.

Switchblade Jesus are one of the best new bands I've stumbled on in ages.  Mixing southwestern boogie, desert-worn blues, retro-metal assault and fierce rocking into a sound that screams Texas.  This band is the blood and soul of it's environment and should not be missed.  Recommended for any fan of the heavy who digs a groove in their blitz.

Their debut album is coming out soon on Bilocation Records.  "I'm first in line to buy it.