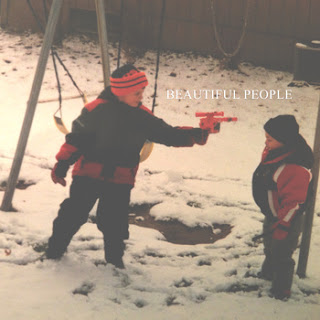 Much like the 2012 release of Jowls album Cursed,  Roanoke’s Beautiful People creates an incredibly heavy atmosphere while still weaving incredibly beautiful music.  This detailed auditory excursion actually has some incredibly detailed and weaving movements in which the guitar lightly twists through a dense forest of sweeping bass and heavy drums.

This album is 90% screaming.  Maybe even higher.  I love screaming.  I love bands that rip an entire album of nothing but screaming.  But I truly think this band is at its strongest when it’s utilizing some of its singer’s variety of skills.  A great example of this is the strongest song on the album, which just so happens to be the title track.  Singer “Connor” has a very emotive voice.  It’s not the strongest, but it really conveys a sense of sadness that really moves me.  Combine that with his screaming, and it really works.  It fits more with the music.

That’s not really a complaint.  This is a very good album. It’s incredibly solid for a band that has only been around for a little over a year.  It’s very mature.  The song writing is akin to bands that try to make you feel something.  It is very pure, and it gives me the same feelings I had listening to some of the great 90’s hardcore or screamo bands.  You know… before they became generic radio filler.  This is very real stuff, and I commend this band for standing out.

I fully recommend this band.  If you like old Thursday, Saves the Day, One Six Conspiracy, or any band of the like… you will really enjoy this release.  I know I did.

Anonymous said…
I've been with these guys since before they were roanoke. Theyve always been really good and have always had their hearts in the music they make. The result is amazing.
September 28, 2013 at 6:47 AM

Anonymous said…
Hey, this is Jack from Roanoke! Just wanted to say thank you for the amazing review!
October 2, 2013 at 9:35 AM