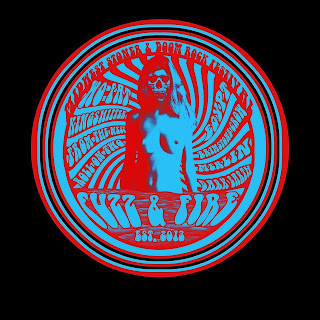 In the middle of the plains on August, 24 2013, light from a hundred roaches fill the smoke infused clouds and rise like a swarm of fireflies set adrift in the heavens. Merriam, KS, a sleepy industrial suburb of Kansas City hosted a whole grip of stoner and doom (and a little bit of straight heavy metal) for the first of, hopefully, an annual tradition of heavy blues and doom.

As we arrived in the middle of From The West’s set, I wasn’t locked into their groove at first. They fired off big and beefy riffs and I liked what I heard. Hard southern rock in the vein of Five Horse Johnson. The singer belted out some vocals at the end of the last song that absolutely slayed. I'm looking forward to their album. They were a real highlight of the local fare. 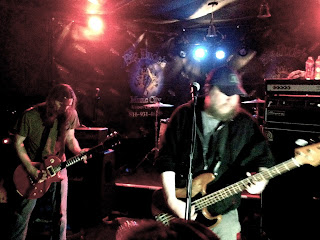 Merlin plays next, on the smaller stage, in the adjacent room so the whole crowd shuffled over to the other side of the building and that was cool because the wait time was relatively short. The first thing I notice is the singer in the halloween wizard robe and beard. I was a little surprised when they open the set with Twenty First Century Schizoid Man, a bold move, not sure I would start with such a recognizable classic but, that's just me. Knowing if I'm going to form an opinion, I'm going to have to wait until the next song… and it's good and filthy doom in the vein of space rock, so I'm grooving out. The wizard has a glow cane and I sort of wonder if he's going to ever set it down. The dude rocks the glow cane the entire set. All around decent set, fit's the bill well so, all thumbs up so far.

Brimstone crow plays big cowbell pounding biker rock in the vein of Danzig without any of the darkness, and a lot of joking around between songs. Solid stuff that fits the bill if not a little bit more hard rock than doom or stoner. No complaints really except toward the crowd, or lack there of.  I expected a bigger turnout but then again  metal like this hasn't been actually popular since the seventies so you take what you get. Good band, big voice, loud guitars and grease, very Kansas City.

Kingshifter seems to be the local headliner as the audience know all the lyrics to the songs. Lyrics consisting of drinking booze and raising hell. Anthemic vocals and biker fuzz, shining through a lens of radio polish. They are good and tight and seem to please the crowd so it seems like a win for all until they finish and the crowd seems to disappear! The singer seems very cool though and sticks around to support the last two acts which made me very happy considering the quality of doom and stoner rock to come.

Freakin' Egypt hits the small stage and deliver belly blasts of trembling bass grooves and big daddy beats. It starts out mixed very low in the p.a. and as great as they sound, all I can think is, louder, Louder, LOUDER! Every song sounds great and the levels are fixed over the duration of the set. They play constrained but heavy as hell blues rock and the band proves their quiet moments are just as loud as the swell of a band dedicated to tone and warmth of sound. The crowd that stuck around might not have been very well versed in the monolith of sound that is Egypt but they were well pleased, I conjecture. Valley Of Kings is etched on my brain, by the end they had managed to crush a coal into a diamond.

Wo Fat ends the night on the big stage and they bring their massive southern-stoner-rock to the KC area with a high decibel crack of thunder. The rock warriors start the set off with Black Code and their lengthy numbers sound tight and short with the energy they exude. Great guys playing great jams and no better way to end a festival. The vocals are cutting out most of the time and this doesn't do much to hamper the vibe and electricity of these Dallas die hards. Just beautiful, a great night that leaves me smiling and looking forward to next year. Get on board bands, this was a good venue in the middle of the country, ripe for bringing old school blues rock, doom and stoner. My cold and gloomy heart was warmed that night. Thanks to all who put together the first Fuzz & Fire, minus a few hiccups, you ruled my world.