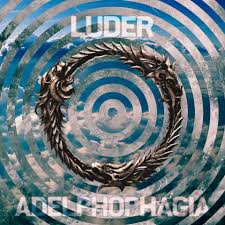 Alright, on the block today we have Detroit, Michigan’s Luder; who has the hardest record names to pronounce ever.  Adelphophagia.   What a tongue twister.  Alright, enough comedy, let’s get to the brass tacks and brutal honesty.

The honesty is on me this time.  I kind of ignored Luder.  Why?  Well, I’m an opinionated asshole.  I’m working on it.  Give me a break.  So what that just said is that I missed out on some great music.  In my defense, they didn’t quite fit in with my riff-centric, distortion-addled, psychedelic mind warp that I was going through when I was introduced to the band.  That is not to say that they don’t have great riffs, aren’t psychedelic, or don’t use distortion.  That would be totally incorrect.  In fact, they have ample amounts of each.  Luder’s strongest point is that they utilize these musical devices and put their own spin on it.

Ok, so, imagine Portishead (II was happy to see this reference in the press kit, it is really fitting) getting down on some Big Muffs.  Yeah, it’s kind of like that.  Take the best of the 90’s alternative scene, add some more muscle when needed and you a general idea of what the sound they have made on (here it comes again...) Adelphophagia.

I don’t know if it is worth noting this or not, but I’m going to; guitarist Scott Hamilton is also the man behind Small Stone Records.  This is one reason I wrote them off, so to speak.   I have noticed that other people do as well for the same reason.  That’s dumb, let me tell you. So, for the haters, if you start and develop a record company into a success, it’s because you might know something about music...which by pop radio standards isn’t necessary to make it, but this isn’t pop music is it?

From the start, Adelphophagia (I’ve had to cut and paste it to make it through this article) creates a mood similar to being suspended in a warm pool of water, staring off into a panoramic vista of the cosmos.  Luder fills the cracks left by modern bands that are overly spacey and/or overly distorted (not that it’s bad to do so, just....played out for a bit).   Adelphophagia can boast of well crafted tunes supported by carefully dialed in tones, especially in Hamilton’s guitar.  On top of being stacked from start to finish with incredibly listenable hard rock originals, there is a cover of David Bowie’s “I’m Afraid of Americans” that absolutely slays.  It had to be mentioned, but don’t get caught up on it.  The whole record is really fantastic.  Adelphophagia should creep on some of this years ‘best of’ lists.  If not, it’s because they didn’t listen to it.