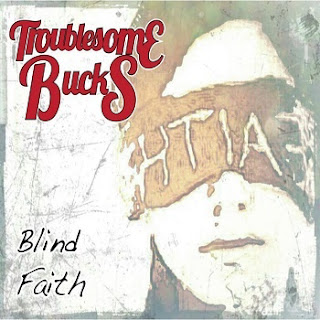 "After playing together for over 5 years the band decided it was time to really make a go at their original material which somehow always seemed to get pushed to the back burner. You won't have to wait as long for the next installment as the band are now committed to making original music and promoting the shit out of it! 2013 should be 1 rockin' year! GET HER BUCKED! "

Wow! Killer blues based rock and roll riffs that could be written by Tommy Iiomi. could it be true? Sure can, if Tommy played blues rock and not doom metal. I'm not trying to compare Troublesome Bucks to Black Sabbath because it would be like comparing an apple to kiwi. What initially picked my interest was the killer guitar work. Of course this album is much more than guitar work, the vocals, drumming and bass are some of the best I've heard in a long time. The songs kick you in the ass demanding your attention. This is some seriously great music here, listen now and get hooked.