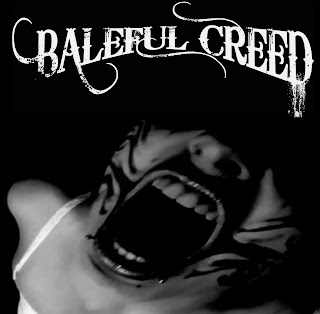 "Baleful Creed are a four piece band from Belfast ready to pour out their classic rock influenced tunes in a passionate live performance. Featuring a dual guitar team that lay down head-nodding chunky riffs that touch on the Stoner Rock sounds of Black Sabbath, Danzig and Fireball Ministry topped off with soulful vocals that are fueled by the powerful bass and drum rhythm section."

I've had the opportunity to listen to Baleful Creed's previous EPs in the past. I've been greatly impressed from day one. Time limitations have prevented me to write about them in the past but I couldn't wait any longer. It's time to unleash the beast.If there's a future to stoner metal, Baleful Creed is it. The full length is a combination of their two previous EPs. The tracks have been remastered so they sound a lot better than before (although they've sounded pretty badass before). It's a sweet album featuring lots groovy riffs, some killer solos, and lots of memorable and catchy tunes. The album grabs you by the balls and doesn't let go. This is the future of metal my friends. You've been warned.