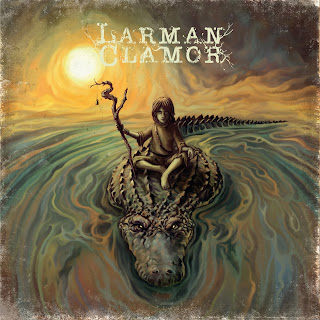 "Larman Clamor is throwing a carnival. More of a street fair, really. You’ll find the sky is tinted a greenish yellow watercolor, the air is tepid and wet with humidity, bugs come in swarms, and later, a parade of children on the backs of reptiles will come out of the swamp and march down the crossroad.

The third Larman Clamor full-length, Alligator Heart follows on the heels of 2012’s Frogs, 2011’s Altars to Turn Blood and that same year’s debut self-titled EP. It is the most accomplished release to date from the solo-project of Alexander von Wieding – also illustrator for Karma to Burn, Wo Fat, Monster Magnet, Freedom Hawk, Infernal Overdrive and countless others – and like its predecessors, it masterfully captures a swamp-boogie atmosphere, updating blues and rock traditions with a down-home psychedelia that’s alternately creeping and malevolent and raising its hands in upbeat testimony. Based in Hamburg and begun in 2008, Larman Clamor pays a heavy debt to Delta blues (John Lee Hooker, Robert Johnson, Mississippi Fred MacDowell), but has never sounded so much like itself as on Alligator Heart."
Got a winning formula? Why change it. Album after album, Mr. Von Wieding keeps belting out great sounding albums like Hank Aaron would belt out home runs. Dirty, murky, thick and heavy swampy blues rock is what this is all about. This is great music to sit back, light one up, crack open a cold one, etc, and enjoy.