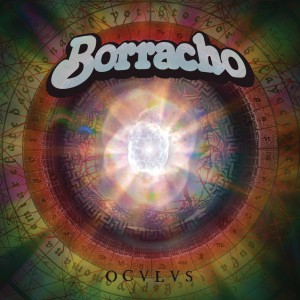 The birth of a star.

There are moments that those who watch the skies live for.  The observation of a star going supernova.  The creation of a Red Dwarf.  The cosmic birth of a new world.

And those moments exist for those who watch the underground as well.

Witness, the birth of the new planetary star that is Borracho.

Formed in 2007,  Borracho first captured Ripple ears with their massively riffed out long player, Splitting Sky.  Since then, Borracho has continued to pump out EP's and Singles of bludgeoning, stonerfied heaviness.  Oculus is their latest effort and finds the band growing and expanding in ways few would have predicted.  Maintaining all the trademark Jurassic-sized stoner riffs and thunderous rock, Oculus brings in textures and expanded scenescapes-- touches of prog structures, moments of ambient etherealness, and black-shrouded doom.

Album opener, "Empty," is anything but.  Mixing near middle-eastern tones into the slow-building intro, massive riffs ramrod through the gentleness with the force of two colliding heavenly bodies.  The song trudges over the bubbling magma of resultant primordial sludge through the 5 minutes of intro before the vocals kick in, feeding new life into the burgeoning landmass.  Stoner doom at it's finest.

"Know the Score," enters with a surprising wisp of acoustic guitar before the riff-assault begins--combined with one of Borracho's best melodies and near sing-along catchy verses.  If "Empty" was the sound of a new planetary world being born, "Know the Score" is the moment that life first emerges from the nascent terra firma.  It's organic groove is the heartbeat of the new planet, it's addictive riffing the muscle.  It's melody the brain.

"Stockpile" is the slow trudge of the building of mountains, the valleys, the cliffs, with its slow, yet relentlessly steady riff and bass.  Slow and plodding, like passing of time, the rise and fall of the oceans, wearing away the newly born rock, carving it into patterns and kaleidoscopic prisms.  All leading to,  "I've Come for it All."  With it's swinging beat and rock energy, we have the rise of life.  Mankind on planet Borracho, the steady pulsing energy of racing hearts, working muscles, and bustling civilizations.

5 songs birthed over 34 minutes, this new world of Borracho finds the band at their current peak, creating worlds of heaviness in their interstellar epic.