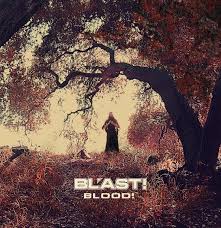 Hey, this is kinda cool - a brand new album of recordings by BL'AST from 1987 that have never been heard before! BL'AST were an intense hardcore punk band from Santa Cruz, CA that were active for most of the 80's. They are always compared to Black Flag. Henry Rollins once said that all their songs sound like Black Flag's "Thirsty & Miserable." That's not entirely true. Some of them sound like "Modern Man," "American Waste" and "Can't Decide." Hell, I love all those songs and I always liked BL'AST a lot, too.

BL’AST! guitarist Mike Neider discovered some old master tapes earlier this year and passed them on to the Southern Lord label. They got BL'AST fan Dave Grohl to mix them at his 606 Studios on his fancy Neve board (as seen in Grohl's Sound City movie). These aren't jam room practice tapes. The fidelity is excellent. Most of the songs were later re-recorded with a different line up for BL'AST's second album It's In My Blood later in 1987. This release features the short lived line up when they were joined by ex-Neon Christ guitarist William Duvall. He's now the singer in Alice In Chains. Got your interest now?

Like I said, the fidelity is excellent and really captures the sound of BL'AST at, well, full blast. Lots of bands tried to match the double guitar assault of Black Flag's 1982 line up. Most of them changed their style again when Black Flag went back to a four piece band. BL'AST just said "fuck it" and kept barreling ahead and never hiding their admiration of BF. Blood is heavy as hell and is a great companion piece to the official It's In My Blood, which is kind of hard to find since no one except Greg Ginn can figure out his logic when it comes to SST's back catalog.

BL'AST specialized in twisted guitar lines, off time rhythms and harsh, barked vocals. There are ten vicious attacks doled out in about 35 minutes. It's a nice reminder of how uncompromising this band was at their peak. The long songs like "Only Time Will Tell," "Ssshhh," and "It's In My Blood" have a heavy My War influence. Shorter ones like "Poison" and "Your Eyes" will remind you of some of your favorite Damaged jams. Youngsters who are into bands like Nails, Powertrip, etc will love this just as much as the old farts like me. There's a fancy vinyl edition of Blood that even comes with an exclusive 7" single so don't snooze on this.

Posted by The Ripple Effect at 1:00 AM