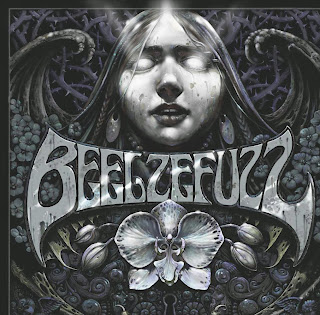 At last! Beelzefuzz's highly anitcipated debut is finally here. For anyone who has followed them from their first trembling steps back in 2009 via two demos to this full-length release by Church Within the time for reverence is upon us. Everything they have done thus far has gone from strength to strength, and a chameleon on stage where the three members: Dana Ortt, guitars, vocals; Pug Kirby, bass guitar and Darin McCloskey, drums can transform and alter songs from show to show elevating them expontentially while still keeping the core of them intact, this studio effort expands their multi-faceted face a thousand-fold! There are quite a few musicians out there that can claim the individual talent these three gentlemen possess but very few have the knowledge and know-how to create this fantastic canvas they are painting.

It shouldn't come as a surprise but the ease with which Beelzefuzz manouvers between the songs is mind-blowing. As confident as the band is though nothing is difficult for them and as they add quite a lot of humour into the songwriting as well, you're in for a world altering journey indeed. Whether it's the balls-out opener Reborn or the heavily weed and opium induced Lotus Jam to the groovy and heavily 70's-tinged Lonely Creatures there's a tongue-in-cheek vibe throughout which definitely broadens their sound. You can tell the guys take what they are doing seriously, however they also step away a little bit let some humour in and most of all they seem to have a shitload of fun playing their music. Taking these aspects into consideration along with the musical inspirations they have great music has been created....no, let me re-phrase that, new great music has been created. Making Beelzefuzz the past, the present and the future of all music.

Coming across as the three grand wizards of holy fuck, they wave their magic wands taking me through strange but extremely pleasant worlds. Song after song I am immersed by other-wordly sounds and imagery. And as I sit back and let it all wash over me, marvelling at the wonder that is Beelzefuzz, I am content and have peace of mind.

Building the songs around the 70's-style drumming of Darin, i.e. an excellent mix of heavy rock, blues and shuffle played with extreme ease but with such power and presence it makes me think of Live And Dangerous and Made In Japan. Pug follows along any shift or change without skipping a beat making his bass guitar thunder, wail or riff at the flip of a dime. Their fantastic rhythmic partnership allows Dana free reign to transport us all to other dimensions. Whether he is taking off on a blistering solo, playing some intricate time signatures or singing his heart out to bring out Beelzefuzz' amazing psychedelic sound, this band will always be a unique ground-breaking and absolutely awesome constellation.

When you get your hands on an album like Beelzefuzz, everything else becomes superflous. True, there's plenty of great music out there but this band puts just about all of them to shame. Of course you have to have a certain level of talent to play music this good, which I have already mentioned but if others could take their cue from Beelzefuzz and shake off the shackles most bands have, the vast world of rock would be truly amazing. In the meantime I will enjoy this one of a kind masterpiece over and over again.

Brought to you in the words P and W.

Posted by The Ripple Effect at 6:00 AM