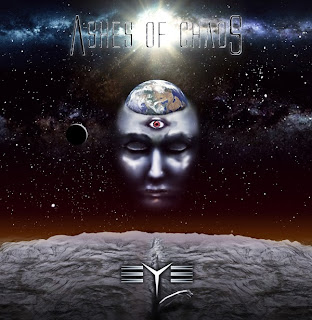 When bands combine genres the end result is either salad or soup.

Salads mix all of the styles, but, you can still identify the parts.  You can see and separately taste the lettuce, tomato, onion and avocado.  You might even dress it up to make it more palatable.  The final product is together but doesn’t change into something different.

Soups are not usually mixed; they are blended.  The end result is a distinctive product where all of the constituent parts meld to form a new whole.  The best soups blend complementary ingredients.  You may taste tomato or chicken, yet, each ingredient is imbued with the other and, in the process, each is forever changed.

Ashes Of Chaos makes soup out of metal, screamo, punk, classic rock, progressive jazz, blues, funk and classical music in order to create progressive rock masterpieces on their debut concept album titled "Eye."  The band consists of singer and frontman Alexios Ciancio, guitarist and background vocalist Mike Crinella, bassist Stefano Galassi, drummer and background vocalist Francesco Gabrielli and keyboardist Giorgio Gori.  Eye also has special guest appearances, including  a screaming Marcello Cavalli of Deadly Carnage on the track "Parallels" and an introduction to the track "Rinascita" by Claudia Saponi of Absynth Aura. The band started in 2008 as a heavy metal cover band.  Fortunately, they have started to write and perform their own music and the result has been phenomenal. Ashes Of Chaos says it draws its inspiration from progressive metal bands such as Pain of Salvation, Opeth, Tool, Dream Theater, Symphony X, Mastodon and Goblin. Great bands for sure, but, Ashes Of Chaos stirs in many influences beyond metal.

The Earth is threatened by a huge meteorite and the worldwide authorities decide to hide themselves in underground shelters to escape a sure extinction, without warning the rest of the population against the impending danger.  The protagonist lives in a corrupted world, trying to survive, will even to kill other human beings to survive the collision.  While the world [sic] is waiting hopelessly, the protagonist hides himself in a small bunker and survives the meteorite impact.  Some time later, looking at a post-apocalyptic [sic] landscape, he realizes that his destiny is to be lonely.  Hidden in his underground shelter, aware of other people in his same situation somewhere in the world he tries not to let hope die, however, his true thoughts awaken only when he's asleep: the protagonist will fight against his own subconscious trying to drag him through the abyss of desperation. He has to decide whether to wander eternally in the Circle of Madness until self-destruction, or to resist and wakeup from sleep and nightmares, to carry forth the hope of a human rebirth.

Add this story to the music and you will be asking, "What were these guys taking and where can I get some?"  You can't tell and you can’t have any, but, you can hear the result. It's melded into the ear soup that is Eye.