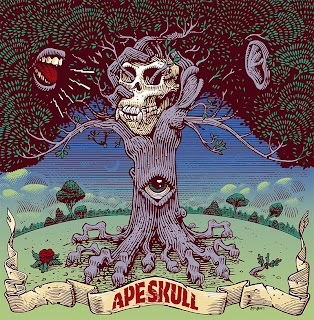 I was born in the seventies and this is what I have to say about it; it rocked. Evel Knievel, roller rinks and classic rock, the seventies produced the most classic of all rock and it was heavy. Can you dig it? It was also the end of an era of analogue production and the sweet middle end you could only get out of vinyl records played out of wood cabinets. The eighties ushered in a slew of  shiny, coded, digital dross. The story went very astray after the age of aquarius and the fight songs morphed into stories of dystopian futures where the energy we used might poison and kill us all. Rebellion became sanitized and over produced and frighteningly inward. Many seventies rockers would get sucked into the negative charge of the coke and a smile Reagan era before it was all said and done.

I’m not sure but I don’t think that everything played out like that in Italy. Don’t tell that to Ape Skull though. If that’s how they see the past I salute them because they have brought back the sound in such an exacting way I thought I was listening to eight track, just waiting for the track fade. On tracks like Bluesy, Hooka and I’ve Got No Time are massive guitar jams that instantly grab you and pull you in. There’s an Ace Frehley guitar tone matched with Deep Purple’s Rhythm section and no nonsense vocals. When the tracks really starting grooving it rocks like two Camaros in an engine revving challenge. It’s more Easy Rider than ruins and Roman artifacts.

On “Time & Wind” Ape Skull channels the power pop of Big Star or Little River Band. It’s a sweet mellow rocker that is quite easy to hum along with, a song that might have sounded contemporary four decades ago, but it’s also cool. It would have easily fit into The Dazed And Confused OST. I would suggest this band to any fan of Witchcraft especially if they find them too depressing. This would also be good for anyone who loves The Atomic Bitchwax but think they have become too pretentious. It’s just sweet and simple rock and I am so glad people are still cranking it out. The delta blues influenced so many bands because it was just that pure and good. Plus it’s the perfect antidote to all the sad bastard music out there. Nothing “Post” at all about Ape Skull this is as “Classic” as it gets.