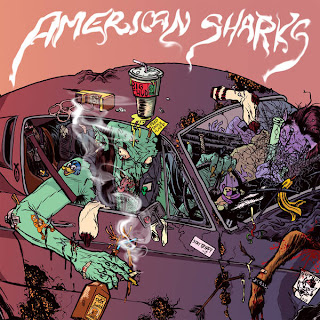 If there's one thing I can really get into is a good old fashioned rock and roll album. In what is a seemingly crowded market, it's nice when something fresh and unique comes along. American Sharks fits that bill just perfect.

The band was first brought to my attention awhile back when there was a small writeup over at The Obelisk. I didn't really follow up to much beyond their 2 tracks posted on Bandcamp. I had forgotten about them completely until they were announced as touring with the mighty Clutch on their upcoming 2013 Earth Rocker fall tour. Who are these guys? Oh shit, I remember now. Perfect timing too because a new album was in the works. Man is it a winner.

The album kicks off in grand fashion. Heavy guitars, riff after glorious riff, and a shitload of adrenaline. The album is fast paced. It's like the band took a page from punk pioneers like The Clash or the Sex Pistols, mixed it with some great Texas based rock with a hint of surf and garage rock. This is some seriously rocking music. I had to double check to see where the band is from. Austin, Texas. I figured they were a Southern California band. They faintly remind me of The Shrine. That's about the closest you'll hear to something modern. What does that mean? Well for starters it means that they're not trying to be the next "Band A" or "Band B." Originality is the key. As of this writing, I've had it stuck on repeat for the last few hours. My play count was at least 20 or so since I received the album for review (before tonight's listening session). With each listen I'm getting more and more psyched to see them when they open for Clutch. Perhaps more than Clutch themselves.

American Sharks gets released on CD and vinyl September 17th, 2013. Make sure you give it a listen, you'll be glad you did. Don't miss them on tour with Clutch and The Sword this fall too.