A Ripple Conversation with Vicolo Inferno 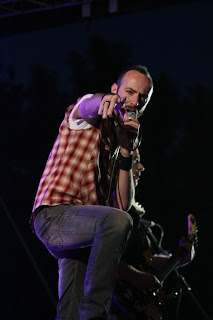 Excellent hard rock sound, who are the influences?

M   MARCO: We don't have a main influence, we like to listen to a lot of music mainly from the eighties and nineties... Alice in Chains, Ozzy, Motorhead, ... but also Aerosmith!

IGOR: …and Bon Jovi, Kiss, Whitesnake, Europe, Toto and many others…..if I hadn't lost my hair it would have been 80’s style! Ahahah

MARCO: Some songs come from a guitar riff, some others from a voice idea Igor takes out of the magic hat... then everybody adds his own ideas and flavours. For this album we worked a lot also in the recording studio, without the common pressure you have there... I think you can feel this while listening to the cd.

IGOR: Yes, yes…they’re very happy when I arrive at the rehearsal room and I say something like:” I have an idea for a cool guitar riff ... this I how it should be: tha tha than nha nhaii na na naii niah ... do you understand?.. Let me see how you play it!! “... hahaha!


How is the music scene where you live?

MARCO: It's a very fervid scene, we have a lot of serious rock bands who, like us, try to find a way to emerge from underground... so be afraid of Italian metal bands!

IGOR: ..There is a healthy rivalry, it's natural, but we collaborate and we support each other...to grow up our music scene.


One city you have never been to but would love to play?
MARCO: Stockholm... for the strong rock scene there.

IGOR: I look across the ocean, if I can dream, I say Nashville!.. For many “tasty” reasons!!


What's next for the band?
MARCO: We hope to organize a small European tour to promote Hourglass and spread Vicolo Inferno's word outside Italy!

IGOR: Yes right, getting on stage, have an experience abroad should be nice... and there would be a draft of the screenplay for the first video clip taken from Hourglass…