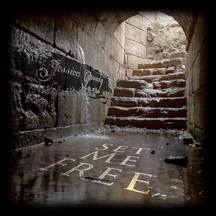 Give it to us loud and hard.  Make it sound classic but, with hooks and power. Stir in some metal and blues.  Belt out the songs with a siren edge steeped in the tones of Ann Wilson, Chrissie Hynde and Debbie Harry.  Lay down a deep guttural bottom, sear it with vicious lead guitar and lethal rhythm.  Show us your raw energy, rough and tumble side and you have Set Me Free by The Jessica Prouty Band.

The eight track album, to be released this fall, will knock you down, pick you up, bang your head against the wall, pull the steps out from under you, and you will love every minute of it.  This female-fronted rock band features three members who presently attend the esteemed Berklee College of Music: lead vocalist and bassist Jessica Prouty and guitarists and back-up vocalists Aaron Shuman and Cody Nilsen.  Drums are competently handled by Cam Pelky.  They also call on players like keyboardist Andy Covino when that ivory touch is needed.  The band, formed in 2007, hails from Boston, MA, and its recordings have received significant airplay in the Northeast U.S.
The song "Set Me Free," from the album of the same name, was released as a single this past March. It, like the album, was produced and engineered by Brian Maes and mixed and mastered by three-time Grammy winner Bob St. John.  I have been fortunate enough to hear all eight tracks. The single is just a teaser and a great sounding one at that! The album is a bit more eclectic.  The eight tracks on Set Me Free let the band display its versatility.  From slide guitar to metal to pop to an acoustic duet and, yet, the album does not come off as a mish mash of styles.  Each tune is played with aplomb.  Here's how the band's publicity describes the tracks:


Light This Place Up

Beginning with some old fashioned slide guitar and amped up, thick chords, this song brings out modern pentatonic rock all about going to a rock concert and lighting things up.
Set Me Free (Single Released March 2013)

The song the album is named after. It's about being bound up, chained up, stuck in a hard place - and breaking those chains to be truly free, unbound from anything.

Bi-polar verse and chorus make this song vicious and soothing... all in 3 minutes and 22 seconds. "I Know" is the breakup song taken to the next level.

This piece questions every past relationship you've had. What if the one who got away asked you to run away with them? Somber, haunting, and oddly uplifting towards the end.

Filled with hidden meanings and various visuals of fire and ice, Devastate can be seen as a song about conquering your worst nightmare - whether that be someone you loathe, a dragon, or a necromancer.

Also known as the sexy song.

More "rock/heavy pop" than anything else on the album, "Tired" combines a catchy, upbeat melody with the heartache of having to breakup with significant others in numerous relationships.
Take a Walk With Me

This song features a duet between Cody and Jess, and is THE acoustic/moderately slow song on the album. The meaning behind the song lies in a broken romance, a silent phone call, and yearning to fix what went wrong.

It all makes for a great rock experience, one The Jessica Prouty Band will reenact as they play these tunes live during their summer New England tour.   See if you can set yourself free and catch one of their shows!  Here is their performance schedule - http://jessicaprouty.com/jpband/Events.aspx
- Old School